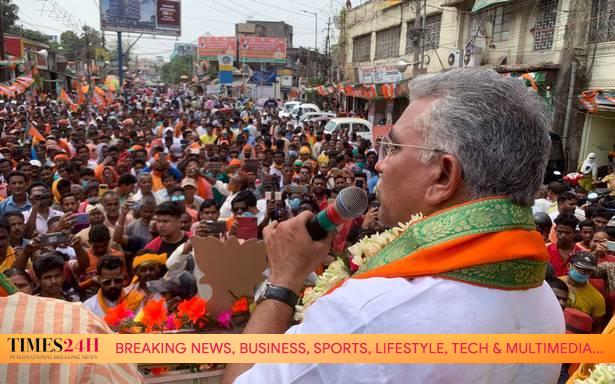 “The plaster has been removed and crepe bandage has been put… She is wearing a saree and one feet is covered. Instead, she should wear a Bermuda so that it can be clearly seen ,” Dilip Ghosh said.

West Bengal Bharatiya Janata Party president Dilip Ghosh courted a fresh controversy on Wednesday when he spoke about the injuries suffered by Chief Minister Mamata Banerjee and suggested that she wear Bermuda shorts instead of a saree.

“The plaster has been removed and crepe bandage has been put…. She is wearing a saree and one feet is covered. Instead, she should wear a Bermuda so that it can be clearly seen ,” Mr. Ghosh had said at a public meeting in Purulia on Tuesday.

The remarks drew strong condemnation not only from the Trinamool Congress, but other parties in the Opposition as well.

“Such a derogatory comment can only be expected from Dilip babu. Such condemnable comments against a woman Chief Minister proves that leaders of the BJP in Bengal do not respect women. The women of Bengal will give a fitting reply to the insult to Mamata Banerjee on May 2,” the Trinamool Congress tweeted from its official Twitter handle.

TMC MP Mahua Moitra came out with a stronger response. “@BJP WB Pres asks in public meeting why Mamatadi is wearing a saree, she should be wearing “Bermuda” shorts to display her leg better. And these perverted depraved monkeys think they are going to win Bengal,” Ms. Moitra said on social media.

The Chief Minister is still on wheelchair and addressing three rallies every day. Before the start of a public meeting, her injured foot is placed on a tool for support. Even leaders of the Communist Party of India (Marxist) condemned the remarks directed at the Chief Minister and described them as “ derogatory”.

Meanwhile, Ms Banerjee on Wednesday launched her most scathing attack yet on Prime Minister Narendra Modi calling him “ the biggest liar”.

“I used respect the Prime Minister’s chair. I still do, but sorry to say, Narendra Modi is the biggest liar I have come across,” she said. The Chief Minister alleged that money was being distributed to influence voters and said that anyone giving credible information would be rewarded with a government job.

In another development, Jharkhand Chief Minister and Jharkhand Mukti Morcha leader Hemanta Soren campaigned on Wednesday for the Trinamool Congress candidates contesting from State’s Jangalmahal region. The JMM had initially planned to put up its own candidates, but then decided against it. Mr Soren addressed three rallies at Mambazar (Purulia), Bandwan (Purulia) and Taldangra (Bankura) in support of TMC candidates.