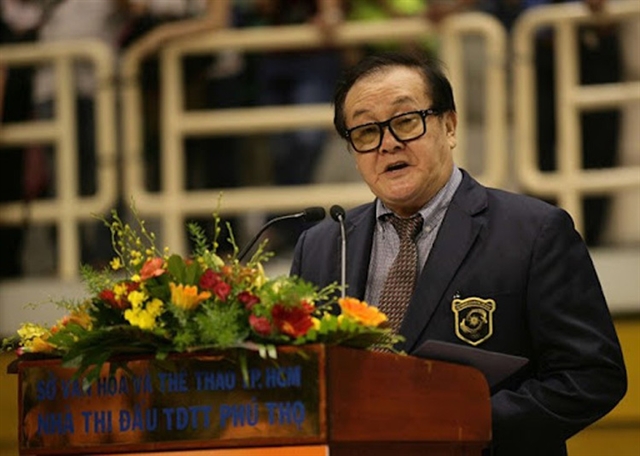 
Giang’s family announced his passing, saying he died at his home in Hà Nội in his sleep. He had a history of heart disease, high blood pressure and diabetes.


Details of his funeral arrangements will be announced in the coming days.


“His death is a big loss to his family and Vietnamese sport,” said Trần Đức Phấn, deputy director of Việt Nam Sport Administration. “Please may he rest in peace.”


Born in 1946, Giang was one of Việt Nam’s sporting legends who contributed a great deal to martial arts and the nation’s sport.


Giang was the national high jumping champion in the 1960s and his result of 1.96m had been national record for a long time before he broke it himself during his time studying in Kiev, Ukraine, in early 1970s.


The son of famed professor Hoàng Minh Giám, he was also talented at many other sports such as basketball, football and other events of track and field. He was also a master of the martial art, Vịnh Xuân Quyền.


After his graduation in 1981, Giang returned home and brought with him the sport of fencing to develop it in Việt Nam. Currently, Việt Nam are one of the best fencing nations in the Southeast Asian and some athletes have reached Olympic level.


He also ‘imported’ some other sports such as wushu, pencak silat and sepak takraw which are suitable with Vietnamese people’s physique, body shape and agility.


Giang was considered leading expert of national sports and was head of the organising board which successfully held the 22nd Southeast Asian Games in 2003, the first in Việt Nam’s history with the hosts taking the top position.


In 2012, Giang, who spoke English, Russian, Chinese and French, was presented an international award for his contribution to the Việt Nam Olympics and international Olympics movements.


Giang, General Secretary of the Việt Nam Olympic Committee in 2006, was awarded Labour Hero in Renewal Period for his contributions to national sport. He remains the only sportsman to take this honour to date.


Before his death, he was President of Việt Nam Traditional Martial Arts, Vice President of ASEAN Sport Federation.


Just a few days before his death, Giang was preparing for a meeting of the Olympic Council of Asia on September 13. — VNS