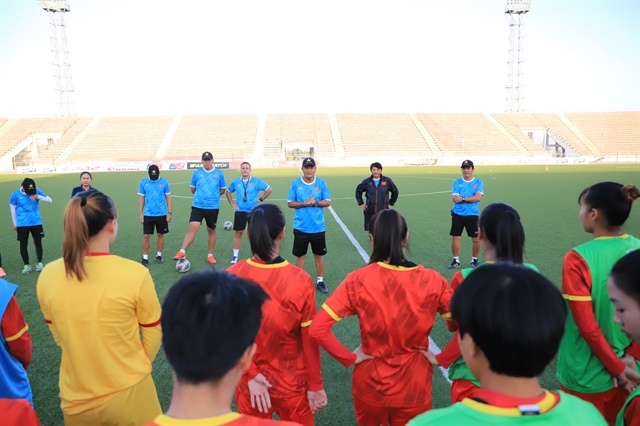 Việt Nam national women team manager Mai Đức Chung (centre) addresses his team during a training session. The coach is confident they can progress to the World Cup despite being pitted against tough opponents in the group stage. — Photo courtesy of VFF


HÀ NỘI — Despite facing Asia’s giants Japan and Korea in the group stage of the 2022 AFC Women’s Asian Cup, Việt Nam national women team manager Mai Đức Chung is determined to lead the team to their World Cup dream for the first time in history.


According to FIFA ranking, while defending champion Japan ranks 13th and 3rd in Asia, South Korea is in the top five strongest teams in the region. Myanmar, the remaining team in the group, is also considered a tough opponent with the ranking of 46th in world football.


Compared to Việt Nam’s rival Thailand who face Australia, Philippines and Indonesia, Chung said that his team is facing much more difficult opponents, but will do everything they can to qualify.


“The goal of the team is to win a place at the World Cup,” Chung said.


“Every match will be like a final for Việt Nam. Football is also unpredictable, if the whole team plays well, there will be chances of good results.


“The match against Myanmar is very important, we must win that match and score as many goals as possible to have a chance to go through the next round as one of the best third-placed teams.


“When playing against Japan and Korea, we also need to focus on reducing the number of goals conceded because they are very strong teams in Asia.


“Japan is a team that continuously attends the World Cup and South Korea also has a chance to attend this competition. Their levels are outstanding and we have to know our place and do our best.”


Discussing preparations for the 2022 AFC Women’s Asian Cup, Chung, 71, added: “The Vietnamese Women’s Football Championship, scheduled to take place in mid-November, is essential for the players.


“The coaching board will watch them closely and select players with the best performances. The next player list will not be the same as the qualifiers.


“To maximise the result, we will review and consider calling additional players for the central defender and full-back positions.


“As soon as the championship ends, I will ask VFF for a national team gathering on November 28. I want the team to have an international practice environment outside of Việt Nam, which is expected at the end of December this year.


“We must be well prepared, both mentally and professionally.


“In the group stage, we may not go through the next round directly as one of the two best teams, but fighting for a play-off is the highest priority.”


The AFC Women’s Asian Cup will take place next year from January 20 to February 6 in three Indian cities of Mumbai, Navi and Pune.


After the group stage, the six first and second teams from the three groups and the two best third-place teams will advance to the quarter-finals. The five teams with the best results after the tournament will qualify for the 2023 World Cup.


However, because Australia is the host, if they are among the five best teams, the sixth team will win a place to the 2023 World Cup.


In addition to the six slots, Asia also has two inter-regional play-off slots to compete for tickets to the biggest football event. — VNS