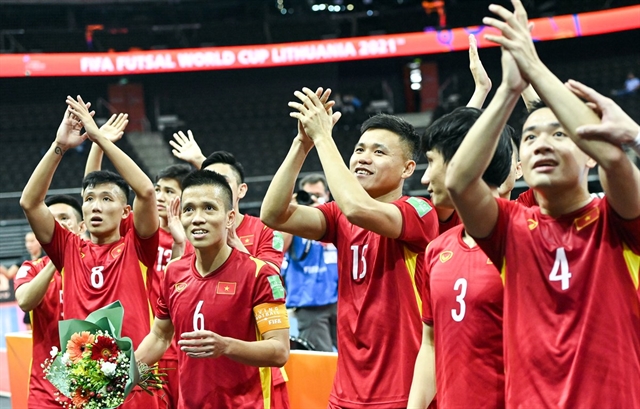 The Vietnamese futsal team celebrate after reaching the knock-out stages of the Futsal World Cup in Lithuania. Photo courtesy of the VFF


HÀ NỘI — Việt Nam will play Russia in the knock-out stages of the Futsal World Cup in Lithuania after a 1-1 draw in the final group match against the Czech Republic on Sunday.


It is a repeat of the 2016 World Cup when the two sides met at the same stage. Russia ran out comfortable victors then after a 7-0 win in Colombia five years ago.


Việt Nam lost to Brazil 1-9 in the opening match, beat Panama 3-2 in their second game, and finally drew 1-1 against the Czech Republic to qualify for the group stage with four points as one of the four best teams in third place.


The game against Russia, who finished top of their Group, will take place on September 22.


Although Russia, who are ranked fourth in the world, are still stronger, Việt Nam hope their good team spirit can help them cause an upset.


Trần Anh Tú, head of the Vietnamese team at the FIFA Futsal World Cup, revealed that the love of the fans and the encouragement from players’ families back home has helped the team perform at their best to reach the knock-out round.


After this impressive run, the Việt Nam Football Federation (VFF) decided to reward the team with a bonus of VNĐ800 million (US$35,400). In addition, the Voice of Việt Nam (VOV) also awarded the team VNĐ200 million.


Earlier, the VFF also gave the team VNĐ500 million in prize money for their win against Panama.


Nguyễn Văn Hùng, minister of Culture, Sports and Tourism, said that he phoned to congratulate the Vietnamese team after their great achievement.


Overcoming many difficulties, the team played resiliently and made efforts to become one of the best 16 teams of the FIFA Futsal World Cup 2021, he said.


“On behalf of the Ministry of Culture, Sports and Tourism, I send my congratulations on the victory to coach Phạm Minh Giang and his team,” said Hùng.


“I hope that the team will continue to perform well in the next match. The team’s achievement is a gift for the fans back in Việt Nam.” — VNS