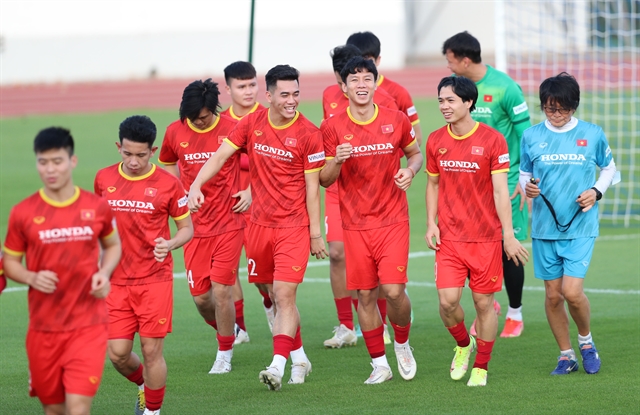 The Vietnamese national football team train in Vũng Tàu City to prepare for the AFF Suzuki Cup 2020. Photo courtesy of the VFF


HÀ NỘI — The Vietnamese national football team are gearing up for the AFF Suzuki Cup 2020.


The 34-member squad are training in Vũng Tàu City to prepare for the tournament scheduled to take place from December 5, 2021 to January 1, 2022.


Among the squad, eight U23 players called to the national team have quickly integrated with the seniors as most of the young players have played with the first team in the past, including midfielder Nguyễn Thanh Bình who was part of the World Cup qualifying squad.


The Vietnamese squad will train in Vũng Tàu until December 1 and coach Park Hang-seo will shorten the list to 30 players before leaving for Singapore.


Việt Nam will enter the AFF Cup 2020 as defending champions with a strong determination to defend their title.


Despite suffering six consecutive losses in the World Cup qualifying campaign, the Vietnamese team will likely to maintain their No 1 position in the Southeast Asian region.


“We are the AFF Cup defending champions, so our image and reputation must be maintained,” said Trần Quốc Tuấn, vice president of the Việt Nam Football Federation (VFF).


The VFF has also changed the schedules and format of both the V.League 1 and V.League 2, creating better conditions for selected players to leave their clubs and represent the national team.


Việt Nam are in Group B alongside Malaysia, Indonesia, Cambodia, and Laos. While Group A includes Thailand, Myanmar, the Philippines, Singapore, and the winner of the play-off match between Timor-Leste and Brunei.


The AFF Cup was scheduled to take place last year, but was delayed till later this year due to the COVID-19 pandemic.