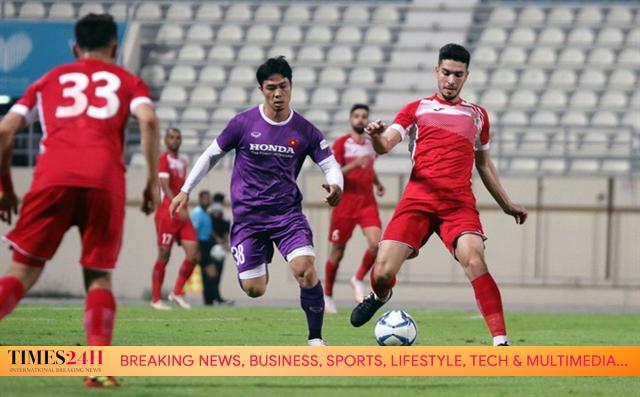 
HÀ NỘI  A penalty save from Nguyễn Văn Toản and an own goal from Jordan saved Việt Nam from a defeat against the Middle Eastern side in their only friendly match before their 2022 World Cup qualifiers in the UAE.


The two sides agreed to play the friendly on Monday night in secret, with no media or fans in attendance to keep their tactics under wraps ahead of competitive fixtures.


South Koran coach Park Hang-seo changed the entire Vietnamese team at half-time to evaluate more of the squad and every player got some minutes, apart from Đỗ Duy Mạnh, Trần Đình Trọng and Trần Minh Vương, who all recently returned from injury.


According to the match report from the Việt Nam Football Federation, the first minutes of the first half were quite open and in the 11th minute, Jordan took the lead through a quick counterattack.


Việt Nam equalised just 14 minutes later via an own goal and the sides went into the break level at 1-1.


In the second half, goalkeeper Văn Toản saved a penalty from Jordan after a Vietnamese player committed a handball in the penalty area.


The team took the day off yesterday to recover and will return to training today.


The national team will face Indonesia on June 7, Malaysia on June 11 and the UAE on June 15, and will be looking to finish on top of the group and make it to the third and final stage of World Cup qualification for the first time in history.


All the matches will take place at 11.45pm Việt Nam time.


In the Asian Cup 2019, VIệt Nam defeated Jordan on penalties to reach the quarter-finals. VNS