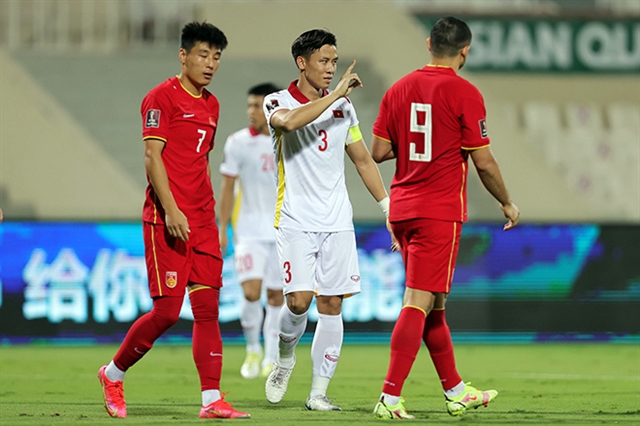 Việt Nam national team captain Quế Ngọc Hải (3) believes that having supporters in the stadium will spur the country to victory. Photo 24h.com.vn


HÀ NỘI   With the return of home supporters, Việt Nam national team captain Quế Ngọc Hải believes there could be surprises in store for both Japan and Saudi Arabia in the next two World Cup qualifying games


Around 12,000 fans will be permitted to cheer on the team at the Mỹ Đình Stadium.


And although that’s just 30 per cent of the total capacity, Hải believes having fans inside the stadium could inspire Việt Nam to victory.


“The whole team will promise to always fight our best for the nation to achieve better results,” Hải said.


“The clear goal of Việt Nam is to play well, show the Vietnamese spirit and at least get points against two very strong opponents, Japan and Saudi Arabia.


“I think the fans are waiting for this, especially when the team plays against the top Asian opponents.


“Being able to play at home with supporters is a huge advantage. I would like to thank the fans for always being there, cheering and encouraging the whole team.


“It is important to show what we have got on the field, especially the spirit and attitude of working hard and never giving up.


“The experience we have gained from other matches at this high level really matters a lot so I hope we can do better in the second leg.”


To prepare for the two matches, the national team reunited this week with some major adjustments in the squad.


One of the most important changes is the return of Hoàng Anh Gia Lai’s midfielder Trần Minh Vương after the 26-year-old recovered from a cruciate ligament injury which ruled him out of the last four matches.


Việt Nam started training from October 26 with assistant coach Lee Young-jin as Park Hang-seo is working with the U23 team at the 2022 AFC U-23 Asian Cup qualification.


It is expected that after finishing his duty, coach Park will return to work directly at the team to prepare for the next two matches.


In the last home match, Việt Nam played at Mỹ Đình without supporters due to the COVID-19 pandemic and lost to Australia by a single goal.


The national team will face Japan on November 11 and Saudi Arabia on November 16. Both matches will kick off at 7pm. VNS