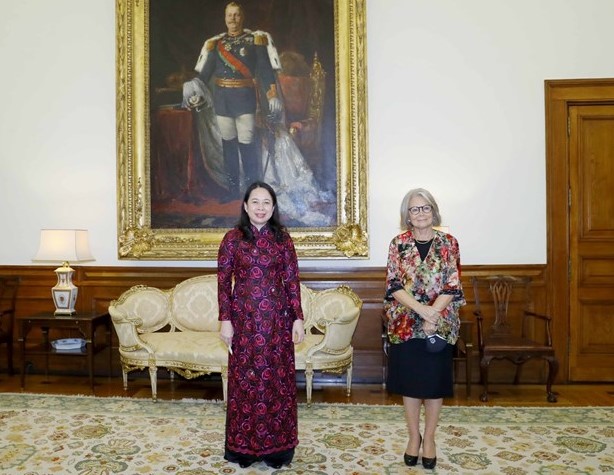 
LISBON – Vice President Võ Thị Ánh Xuân met with Vice President of the Portuguese parliament Edite Estrela, held talks with Foreign Minister Augusto Santos Silva and chaired a business dialogue forum on October 29, as part of her working trip to the European country.  During the talks with Minister Augusto Santos Silva, Vice President Xuân affirmed that Việt Nam was pursuing a foreign policy of independence and diversification and multilateralisation, under which it was deepening bilateral cooperation with important partners, including the European Union in which Portugal is a member.


The two sides took note with satisfaction of the positive progress in Việt Nam-Portugal relations in recent years, and agreed upon measures to further the bilateral cooperation in the time ahead.


They said the two countries should increase the exchange of visits at all levels, particularly at high-level, to create a momentum for bilateral ties.


The sides stressed the need to study directions for bolstering cooperation in all aspects, especially economics, trade and investment. They agreed on the target of raising bilateral trade value from US$471 million in 2020 to $1 billion in the next few years.


The Vietnamese leader called on Portuguese businesses to increase their investment and business operation in Việt Nam, especially in fields that the two countries can complement each other such as sea economy, maritime, renewable energy and tourism. She said Việt Nam would be willing to serve as a bridge connecting Portuguese firms with the Southeast Asian and Asia-Pacific markets.


Xuân asked Portugal to assist Việt Nam in developing trade and investment ties with the EU, and urged the country to early ratify the Vietnam-EU Investment Protection Agreement (EVIPA) and help with the removal of the EC’s yellow card on Vietnamese seafood.


Minister Augusto Santos Silva affirmed that Việt Nam was a priority partner of Portugal as well as the EU. He said there remained large room for the two countries to boost cooperation in trade and investment, and promised that Portugal would create favourable conditions for agencies and businesses of both sides to connect and expand markets. He also pledged to work for the early completion of procedures for the ratification of the EVIPA.


The minister informed that Portugal decided to grant Việt Nam 160,000 doses of Pfizer COVID-19 vaccine through the Covax mechanism, and suggested that the two countries continue to work together in responding to challenges posed by the pandemic and in helping the Vietnamese community in Portugal stabilise their life.


The two sides also discussed international and regional issues of common concern, and pledged to coordinate on multilateral and regional forums as well as support each other at cooperation mechanisms such as the ASEAN-EU and the United Nations.


She proposed that the two countries’ parliaments increase the exchange of delegations. She conveyed an invitation to visit Việt Nam at an appropriate time from National Assembly Chairman Vương Đình Huệ to the President of the Portuguese parliament.


The two sides affirmed that cooperation between the two parliaments and countries would continue to be promoted in both bilateral and multilateral frameworks. They expressed support for maintaining peace and stability, respecting the 1982 UN Convention on the Law of the Sea (UNCLOS) in the region and the world, promoting dialogue and facilitating cooperation and development for common prosperity.


Addressing the Vietnamese-Portuguese business dialogue, Xuân briefed the business delegates on Việt Nam’s socio-economic situation and the country’s development priorities such as high technology, innovation and digital economy. She affirmed that Việt Nam would create all possible favourable conditions for Portuguese investors to operate long term and reap success in the country.


Portuguese business representatives showed interest in Việt Nam’s orientation and strategy for development and integration, as well as possibilities for business cooperation.


The business dialogue was the last activity of Vice President Xuân in Portugal. She is scheduled to start an official visit to Greece on October 31. VNA/VNS