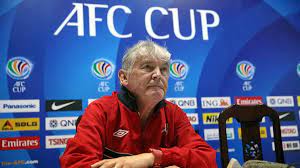 Darby had a brief stint in charge of the Vietnamese national women’s team. — Photo laodong.vn


That Roy Hodgson is revered in Sweden rather than his home country says a lot more about England than it does the coach or the Scandinavian country.


If it didn’t happen in the English top flight after 1992, it’s not worth knowing about for fans and pundits alike, whether you revolutionised the professional game in another country or not.


If Roy Hodgson must suffer the indignity of being remembered for his struggles with a limited England team rather than his many successes overseas, what chance does Steve Darby have of some well-deserved recognition in Blighty?


Not that the Liverpudlian is desperate for acknowledgement in his home country, at least judging by his recently released biography.


The Itinerant Coach – the Footballing Life and Times of Steve Darby was written by Antony Sutton of the Jakarta Casual blog fame and tells the story of Darby’s career as a player and then coach, taking him from the shadow of Anfield to jobs in Bahrain, Australia, Malaysia, Singapore, Thailand, Laos, India and Việt Nam.


The book is well-paced and is well worth a read for anyone with even a passing interest in the unique mores of Asian football, but for the purposes of this column, it’s Darby’s stint with the Vietnamese women’s national team that bears closer examination.


In 2001, after a successful spell in Malaysian club football, Darby was approached by the Việt Nam Football Federation (VFF) to coach the men’s U22 for the upcoming SEA Games in Malaysia.


However, in one of several “only in Asian football” moments in the book, after the deal was agreed for Darby to coach the men’s side, the VFF changed their mind and had him coach the women, a decision made according as they were more likely to win a medal, according to the book.


In a relatively short chapter, Sutton details Darby and Việt Nam’s run to lift the country’s first football medal in the regional tournament, with the adventure punctuated by comical clashes of culture and meddling from (unnamed) non-football officials, something of a running theme in Darby’s career it would seem.


The chapter provides an interesting snapshot of Vietnamese football history two decades ago, especially as it kicked off 20 years of regional dominance for the women’s side. Since 2001, they’ve lifted five SEA Games titles and three AFF Championships.


A short stint in Việt Nam doesn’t mean Darby should be revered here as Hodgson is in Sweden, but would it be going too far to say his work laid the foundations for the successes of the 21st century? After all, the book details how hard Darby had to work to professionalise the women’s set-up, often in direct contradiction to the wishes of the powers that be.


The women’s side of today has plenty in common with Darby in the sense that they aren’t afforded the respect they have earned from media and fans alike, and I’m as guilty as anyone. The streets don’t fill with fans celebrating when they win gold, but maybe next time, they should.


The book is prefaced with a short note from Darby that describes his unbridled joy at watching his daughter score in a school cup final in Hà Nội and how it reminded him of his love of the game, away from the money and glory of professional football.


Perhaps if more of us remembered that the likes of Darby and the women’s team would have their just desserts. — VNS