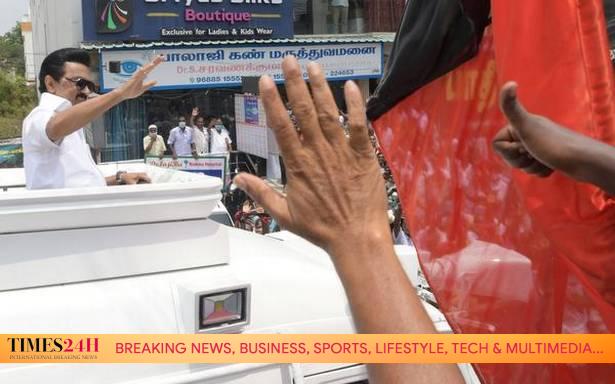 Announcing a slew of measures to revive water resources and agriculture in Tamil Nadu, DMK chief M.K. Stalin said on Sunday that a separate Ministry for Irrigation will be established if his party forms the next government.

“A ministry will be set up for irrigation. A commission for water management will also be established,” he said in an election campaign at Kangeyan in Tiruppur district.

The DMK chief said that a special project for the protection of lakes/tanks under the direct supervision of the Chief Minister at a cost of ₹ 10,000 crore and construction of 200 check dams at a cost of ₹ 2,000 crore will be implemented if his party comes to power.

Enactment of a law to protect groundwater, implementation Tamirabarani, Karumeniyar and Nambiyar river linking, Cauvery-Gundar linking project, strengthening of the banks of estimation and rejuvenation of streams, strengthening and improvement of the banks of Cauvery, Tamirabarani and Vaigai, establishment of monsoon special control rooms and complete implementation of Athikadavu-Avinashi scheme were other promises of Mr. Stalin.

His promises for the region included establishment of a poultry research centre at Palladam, Kangeyam bull research centre and bull shanty at Kangeyam, ring roads at Kangeyam, Vellakoil and Palladam, ESI hospitals at Palladam and Kangeyam, upgradation of Government hospitals at Dharapuram and Kangeyam and a study on the possibility to bring surplus water from Noyyal to fill tanks in Palladam.

Campaigning for DMK candidates contesting in Kangeyam and Dharapuram and MDMK nominee at Palladam, he claimed that the AIADMK and the BJP will not win a single seat if his cadres work hard, not taking rest till the last voter is taken to the pollution station.

“Pre-poll surveys say that DMK will come to power. But we should continue to do our hard work and not to take rest,” said Mr. Stalin invoking the advice of party’s patriarch late M. Karunanidhi.

“BJP will not win even if they resort to whatever tricks they know. They have been washed out which we saw in the Parliamentary election [in Tamil Nadu]. At the same time, not a single AIADMK [candidate] should win. If you ask me why I am adamant that DMK should win in all the 234 seats, I am not greedy. Because if a single AIADMK candidate gets to win, he/she will be a BJP MLA. Not an AIADMK MLA,” he said.

Mr. Stalin added that this was proven by Deputy Chief Minister O. Panneerselvam’s son P. Raveendranath Kumar, the only AIADMK candidate to have won in the 2019 Lok Sabha election, alleging that his letterhead bears the image of Prime Minister and BJP supremo Narendra Modi.

Ridiculing that Chief Minister Edappadi K. Palaniswami was in fear of defeat, Mr. Stalin said that so many people have joined hands against the DMK which is not in power in the Centre and in the State. “They think that DMK can be defeated when ‘Kalaignar’ is not there. But he is there on the ground – in the minds of the cadres,” he said.