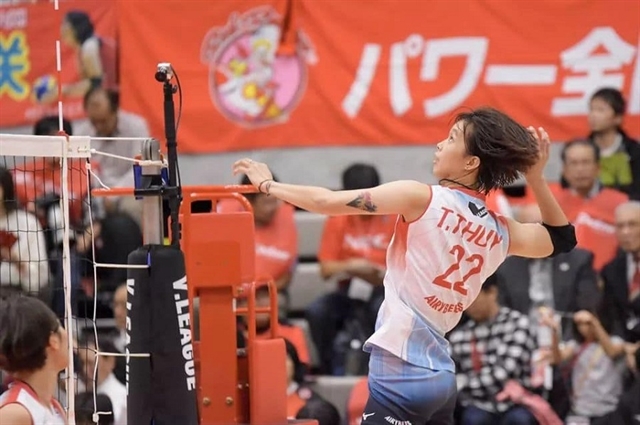 Trần Thị Thanh Thúy is a key player at her Bình Điền Long An Club and the national team. — Photo asianvolleyball.net


This is her second spell in Japan’s V.League Division 1 making Thúy the most ’emigrated’ player from Việt Nam, four times in five years.


She is expected to help the Cats to climb up in their domestic league and push Thúy’s personal ability, her club VTV Bình Điền Long An’s fame and partly Việt Nam’s volleyball to a higher level in the world.


Thúy is a special case in Việt Nam because of her height, her volleyball ability, and her contribution to the national game.


“There is no way a 13-year-old could be 1.78m in height,” former national team and Bình Điền Long An club coach Lương Khương Thượng recalled when talking about the first time he saw Thúy.


Thượng who had been working for many years training and scouting players could not believe in his eyes when standing in front of the girl in 2010.


After having tests and check different sources to confirm Thúy’s year of birth was 1997, Thượng knew that he had found a ‘rough diamond’. Apart from her height, Thúy also had a good arm span, standing reach, and high vertical leap which are ideal for volleyball.


“In my decades working as a coach, I have not ever seen a player with such special abilities like her,” said Thượng.


He was much happier when knowing that despite having not touched the ball, Thúy was a crazy fan of the sport, watching it on TV regularly.


Thúy took Thượng home to talk with her parents. But things did not go easy at first.


The family had moved from Hà Nam to Bình Dương many years ago and had good living conditions. They immediately refused Thượng’s proposal because they did not know who Thượng was and preferred if their daughter followed the academic path.


Two weeks later, Thượng came back, bringing along some other assistants who persuaded them. They failed again although Thượng promised to make Thúy an outstanding volleyballer, offering a great contribution to Việt Nam. He even threatened that such a tall girl could only find a suitable husband in a sports environment!


A month after that, in his third time of trying, Thượng talked and talked and pointed to himself as an example. He was an only child of his parents, he followed sport and he succeeded.


This time, Thúy’s parents spent time listening to him and recognised Thượng’s determination and belief. After a drinking session between the two men, her father decided to let Thúy go and said Thượng would have to take responsibility for what Thúy would be in the future.


Thúy joined Long An’s training centre and was directly trained by him using a special programme.


Under his care, Thúy has grown up strongly.


At 1.93m, she is the tallest player in Việt Nam and third in Southeast Asia.


She has been not only a key player for her club but also the national squad. She has amazing blocks and attacks, notably her tough serves and scoring ability from behind the 3m line, which is rare to find in national volleyball.


Coach Aphisak R, who worked in Long An in the past, watched Thúy for a long time. He expected she would be a new weapon for the club and also helped Long An in upgrading the player’s ability.


Young and unexperieced, Thúy was a little nervous and under heavy pressure. She set a goal of being in the list of 12 players who were played regularly.


But she did an extraordinary job, becoming key outside hitter and was the club’s top scorer throughout the season with an average of 17 points per match. She helped Bangkok Glass defend their title, winning 14 matches. They were crowned champions with two games still to play.


With her contribution in the Thai League, Thúy was one of two Vietnamese, along with her idol Nguyễn Thị Ngọc Hoa, listed as best foreign female players by SMMSPORT, a local sports website, in an article in 2020.


Her strong performance impressed scouts of Taiwan’s Attack Line who offered her a contract for the 2017 season. Thúy did not let the new club down, winning an official place in the first team and was the second-best scorer with 147 points after eight matches.


She came back to Việt Nam to compete in the 2017 Asian Women’s U23 Volleyball Championship, where Thúy scored 111 points in seven matches. Việt Nam finished third and Thúy was voted Best Outside Spiker, her first individual title.


She then took the armband and captained Việt Nam to third place at the 29th Southeast Asian Games in the same year and second place at the 30th Games in 2019.


Her third international spell came after she rejected offers from Thailand and Turkey. Japanese Denso AiryBees finally brought her to their camp in 2019 as the second foreigner at the club.


Although the number of matches for the Japanese club is not as many, she also left a mark with her role and forte with the advantage of height in both attacks and blocks.


Unfortunately, because of the COVID-19 pandemic, all sport tournaments in Japan were postponed and Thúy returned home.


In her fourth time playing overseas, Thúy who is said to receive US$200,000 per year, is expected to help the team to improve its national ranking. Last season, they placed nine out of 10.


Their opening match will be on October 16 against Denso AiryBees, her former club.


“We decided to pick Japan as a destination for her instead of teams from Thailand and Turkey because we believe that Japan is the best environment and most suitable for Thúy,” said Thái Bửu Lâm, a representative of Long An.


“We hope she has the chance to learn from better competition to sharpen her skills which will lift our club and Việt Nam,” he said.


Hours before her flight, Thúy said: “I have learnt a lot since my time with Denso AiryBees. For the coming tournament, I myself want to be comfortable and confident to show everything I have on the court. I will save every moment and use every opportunity to push me to a higher level.” — VNS