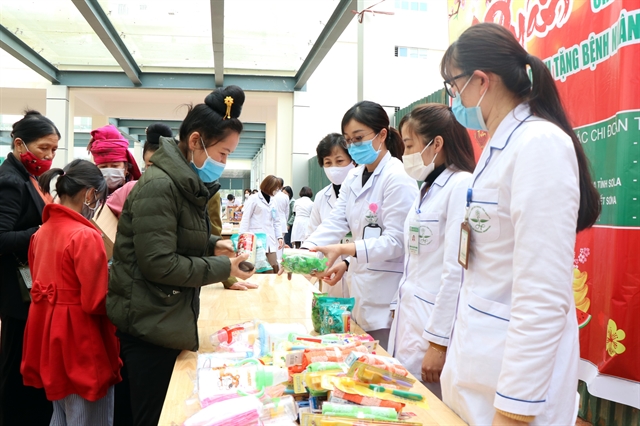 
HÀ NỘI — Many zero-đồng mini supermarkets have been opened for the needy and many programmes have been organised to present gifts to special groups across the country to bring them a warm Tết (Lunar New Year).


She also handed over 650 gifts to poor households, those affected by COVID-19, needy students and 14 charity homes.


On the same day, Party Secretary and Deputy Prime Minister Lê Minh Khái presented gifts to disadvantaged families, workers and those affected by the coronavirus in the northwestern mountainous province of Sơn La.


The Vĩnh Hải Border Guard Station of Sóc Trăng Province on Thursday organised a programme to present Tết gifts to poor residents in Vĩnh Hải and Lạc Hòa communes and eight scholarships worth VNĐ500,000 each to disadvantaged students.


Head of the province’s Border Guard Hà Huy Trường said people in border areas still faced many difficulties, and the COVID-19 pandemic had caused job losses and unstable incomes for many people.


The value of the gifts was not high but demonstrated the special affection the soldiers held for the residents.


Cần Thơ City authorities have kicked off a programme to present Tết gifts to workers to help them overcome difficulties, particularly those affected by the pandemic.


The city’s Federation of Labour presented 100 sets of Tết gifts, worth VNĐ500,000 each, to disadvantaged employees in Vĩnh Thạnh District.


Đặng Song Hồ, who works at the district’s People’s Court, said the gifts would not only help employees like him to have a happy Tết but also encourage them to overcome difficulties. 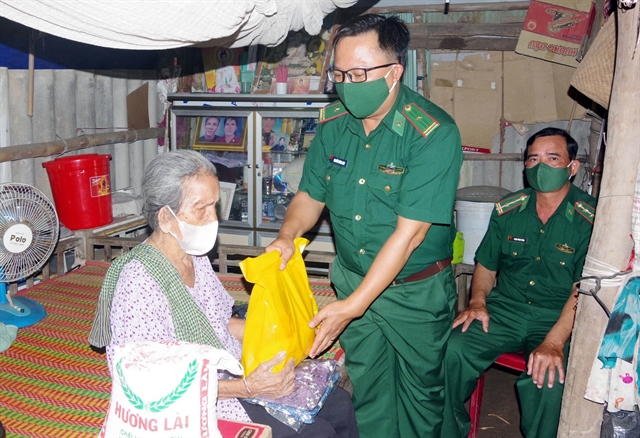 
The 175 Military Hospital in HCM City in coordination with the city’s Vietnam Fatherland Front Committee and donors opened a zero-đồng mini supermarket on Thursday for patients, medical workers, staff, disadvantaged employees, and families of those on duty at island districts or joining UN Peacekeeping forces.


Each person received a voucher worth VNĐ400,000 (US$17) to take items for Tết at the supermarket, which offers nearly 50 kinds of products, including necessities, fruit and clothes.


Deputy Director of the hospital Trần Quốc Việt said the organisation of the store had special meaning, helping patients and medical workers who could not go home for Tết.


On the same day, Sơn La Hospital also organised a charity store for poor patients ahead of Tết.


Lèo Văn Kim from Sông Mã District said he has been hospitalised for nearly a week, and the zero-đồng store meant a lot to patients like him. He was given a voucher to get sugar, milk and other necessities.


Meanwhile, residents in Bạch Long Vỹ Island District in northern Hải Phòng City have had opportunities to enjoy the early atmosphere of Tết by going shopping for various free products to prepare for the biggest festival of the year at a zero-đồng market held by the High Command of Region 1 of the Việt Nam Coast Guard this week.


Each disadvantaged household was presented with a voucher to buy products such as rice, sugar, salt, cooking oil and noodles.


Đỗ Thúy Vân, a local resident, said this was the first time she had attended the zero-đồng market after 20 years living here. She got a voucher to buy glutinous rice to make bánh chưng (glutinous rice cake with green beans and pork) and other Tết items.


The Ministry of Labour, Invalids and Social Affairs has proposed the Prime Minister provide more than 9,800 tonnes of rice from the national reserves as food aid for the needy in Tây Ninh, Cao Bằng, Phú Yên, Ninh Thuận, Nghệ An, Gia Lai and Quảng Bình provinces during Tết and before the next harvest. — VNS