Solar Eclipse Ring Of Fire 2021 Guide: How To Make Simple Viewer Box; Where, When, and More

The upcoming solar eclipse will display an astonishing ring of fire display in the sky. This is also the reason why this space event is called Solar Eclipse Ring of Fire 2021. 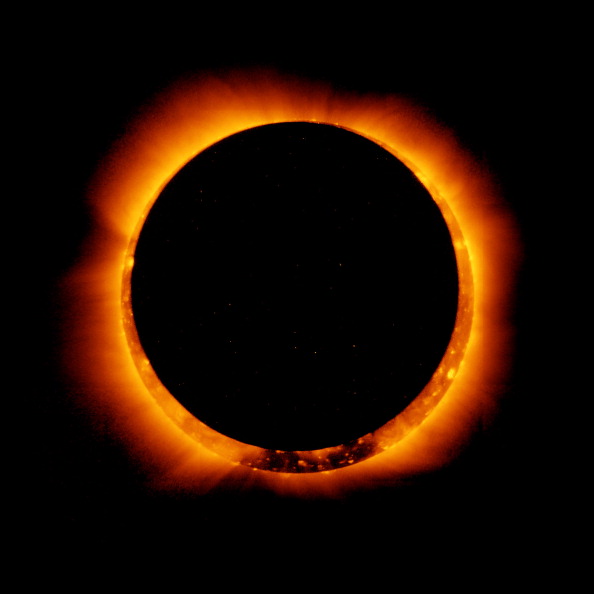 (Photo : Photo by JAXA/NASA/Hinode via Getty Images)
In this handout provided by NASA, sun spots are seen as the moon moves into a full eclipse position after reaching annularity during the first annular eclipse seen in the U.S. since 1994 on May 20, 2012. Differing from a total solar eclipse, the moon in an annular eclipse appears too small to cover the sun completely, leaving a ring of fire effect around the moon.

If you don’t know how a solar eclipse takes place, scientists and other space experts explained that this space event happens when the moon passes in front of the sun. This is quite different from a lunar eclipse, which happens when the Earth passes between the moon and sun.

On the other hand, various experts added that a perfect solar eclipse, when the moon totally blocks the sun, is very rare to happen. Specifically, the new Solar Eclipse Ring of Fire, also known as the Annular Eclipse, happens when the moon is near its farthest point from Earth during the space event.

If you are one of the interested watchers, you can make your own viewer box, which will clearly help you see the new Solar Eclipse Ring of Fire. Here’s how you can make one.

According to Live Science’s latest report, this tool is pretty efficient when it comes to viewing solar eclipses. All you need to do is get a box, a white sheet of paper, tape, a pin or needle, a box cutter, and a small piece of tinfoil. After that, you can now follow these easy steps: When and Where To Watch the Solar Eclipse?

NPR reported that the new solar eclipse will be visible in the Southeast, Midwestern, and Northeast continental United States. On the other hand, people in northern Alaska can also see the complete Solar Eclipse Ring of Fire.

Aside from these areas, Canada, Asia, Europe, northern Africa, and the Caribbean can also glimpse the partial solar eclipse. If you want to see it, you need to go out at exactly 4:12 a.m. EDT.

Solar eclipses are not the ones that people tend to watch. However, some pretty popular lunar eclipses made people go out of their house to see the spectacular view, such as the recent Blood Moon.

For more news updates about the upcoming solar and lunar eclipses, always keep your tabs open here at TechTimes.

Related Article: 2021 Solar Eclipse: Sky and Telescope Magazine Offers Chartered Flight to Get Up Close with ‘Ring of Fire’ Visible This Week