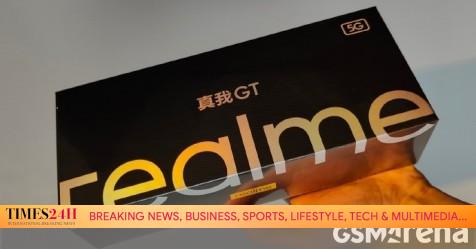 The Realme GT 5G arriving on March 4 appeared on Geekbench with Android 11 and 12 GB of RAM, corroborating previous rumors.

The GT 5G, with the model code RMX2202, has “lahaina” listed in the motherboard section, which is associated with the Snapdragon 888 SoC. The benchmark database does not include any other specs for the GT 5G, although Realme has previously confirmed that the smartphone will ship with Snapdragon 888, LPDDR5 RAM, UFS 3.1 storage, and a 64MP triple camera.

It will also include a Samsung-made 120Hz Super AMOLED display with a punch hole in the upper left corner for the selfie unit and a built-in fingerprint reader underneath for biometric authentication. Previously shared posters revealed the GT 5G’s design and confirmed that it will be offered in glass and leather variants. Now we take a look at an image of the GT 5G retail box that surfaced on Weibo. Its design is similar to that of the Realme X7 Pro, except that it is black in color and not silver. The GT 5G will be priced below CNY 2,999 ($ ​​460 / € 385), and with the official unveiling in less than a week, you can expect Realme to release more teasers to create a hype around its flagship product.