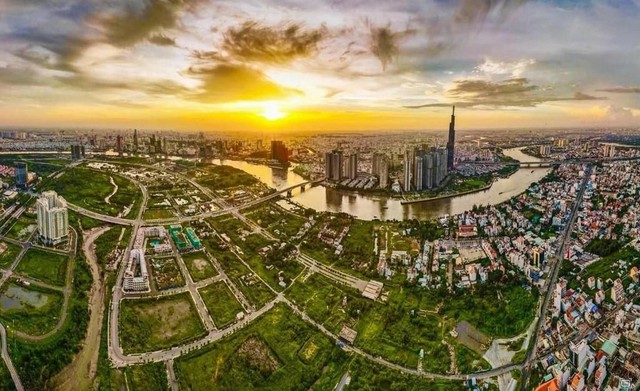 By the end of August 2021, Đồng Nai had approved the compensation plan for 4,584 cases with an area of ​​more than 1,900 hectares and a total amount of compensation of more than VNĐ9 trillion. Photo tinnhanhchungkhoan.vn


HÀ NỘI –  The acceleration of investment in transport infrastructure is the main driving force fueling real estate stocks as many businesses with large land plots located in areas near key infrastructure projects will benefit from this process.


The Government has released the medium-term public investment plan for the 2021-2025 period with a total capital of up to VNĐ2.87 quadrillion (US$120 billion), an increase of 43 per cent compared to the 2016-2020 period. The capital is mainly for investment in transport infrastructure in provinces.


Đồng Nai real estate market is of special interest to investors. Many large constructors have also become involved in this market such as Novaland, DIC Corp, Đất Xanh and Nam Long, to take advantage of opportunities from infrastructure development.


Deputy Prime Minister Lê Văn Thành sent a document asking the People’s Committee of Đồng Nai to focus on speeding up the progress of compensation for land clearance and resettlement for people, helping speeding up the construction progress of the Long Thành airport project phase 1.


By the end of August 2021, Đồng Nai had approved the compensation plan for 4,584 cases with an area of ​​more than 1,900 hectares and a total amount of compensation of more than VNĐ9 trillion.


The Provincial People’s Committee has also proposed that the Government support the locality with more than VNĐ4 trillion to invest in two roads connecting Long Thành airport, including provincial road 763 and provincial road 770B.


According to analysts, real estate projects located around the airport will benefit in the future.


Notably, the Gem Sky World urban area project developed by Đất Xanh Group, enjoying the advantage of infrastructure and synchronous design of the area, has quickly become a hotspot in the province.


The attraction of Đồng Nai’s real estate market also comes from its proximity to HCM City, with Long Thành-Dầu Giây Expressway being a key intersection connecting the two areas.


The province also has many large industrial parks, which are the driving force for the provincial economy. Currently, there are 32 industrial parks in operation and in 2021, three more parks are completing procedures. It is expected that in the 2021-2030 period, there will be eight new industrial parks.


According to securities companies, with the above advantages, projects such as Aqua City of Novaland, Izumi City of Nam Long Group, and Gem Sky World of Đất Xanh Group, are expected to bring benefits to investors and customers who buy early to invest or settle down. When the social distancing measures are eased and public investment disbursement is accelerated, this group will benefit.


According to ACB Securities Co, in 2021, NVL revenue will total about VNĐ21.44 trillion, up 327 per cent compared to 2020 and profit will reach VNĐ4.39 trillion, up 12 per cent thanks to the revenue contribution mainly from Aqua City, Novahills Mũi Né and NovaWorld Phan Thiết.


For Nam Long (NLG) has just increased its ownership rate to 65 per cent in the Waterfront project, expected to open for sale in Q4. According to Việt Dragon Securities Co, in 2021, the main highlight of NLG is stable sales growth. It is estimated that the total sales value in 2021 will reach VNĐ9.3 trillion from the sale of 2,359 realty products.


DXG is expected to achieve high growth in 2021 thanks to the handover of Gem Sky World and Opal Boulevard projects and the recovery of the real estate market.


ACBS Securities forecasts that DXG’s net revenue in 2021 can reach VNĐ9.2 trillion, up 219 per cent over the same period last year, and post-tax profit of VNĐ1.24 trillion.


In early September, DXG was positively evaluated by many securities companies and recommended to buy. VNS