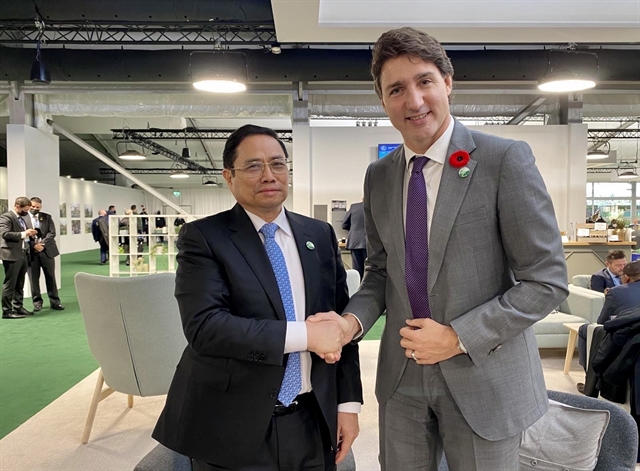 During Chính’s meeting with Trudeau, the two sides expressed their delight at the development of the Việt Nam-Canada comprehensive partnership in all fields, and agreed to further the bilateral cooperation.

They vowed to actively implement and promote the efficiency of the Comprehensive and Progressive Agreement for Trans-Pacific Partnership (CPTPP) to which both countries are signatories, and strive to bring two-way trade to over US$8 billion.

The two leaders agreed that the two countries should speed up negotiations to recognise each other’s green visas and vaccine passports. The Vietnamese leader asked Canada to assist Việt Nam in reforming and perfecting institutions, technology and green finance, and training human resources in climate change response and innovation.

The two sides shared the view on maintaining peace and stability and promoting legitimate and lawful interests on the basis of complying with international law for common peace and prosperity. Trudeau affirmed the spirit of the rule of law, and the importance of promoting a rules-based world order.

Chính proposed Canada create favourable conditions for the Vietnamese community to live, work and study in the country, while Trudeau affirmed his willingness to provide training for Vietnamese students as well as to promote people-to-people exchanges with Việt Nam.

At his meeting with Zambian President Hakainde Hichilema, PM Chính congratulated him on his election. The President of Zambia expressed his admiration for Việt Nam’s impressive and fast development, and proposed the two sides intensify cooperation in trade.

The two leaders agreed to assign the two Foreign Ministries to set up channels for the exchange and sharing of development experience.

Talking with Mayor of Los Angeles Eric Garcetti, Chair of the C40 Cities Climate Leadership Group and a number of State Governors, mayors of cities in the Americas region, PM Chính welcomes the idea of C40’s cooperation with Hà Nội and HCM City within the framework of C40, a forum with the participation of nearly 100 of the world’s largest cities.