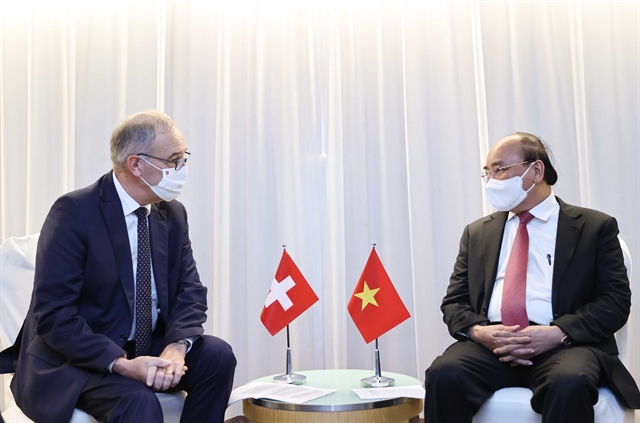 HÀ NỘI — Vietnamese Ambassador to Switzerland Lê Linh Lan has granted an interview for the Vietnam News Agency ahead of President Nguyễn Xuân Phúc’s official visit to Switzerland at the invitation of his Swiss counterpart Guy Parmelin.

During the visit from November 25-29 coinciding with the 50th anniversary of diplomatic relations,  President Phúc will hold talks with Swiss President Guy Parmelin and meet with President of Swiss National Council Andreas Aebi, Linh Lan said, adding that this is President Phúc’s first trip to a European country after taking office earlier this year.

In addition to official activities organised by the federal government, the leaders of the Bern and Geneva states are also planning a welcome and reception for the Vietnamese high-level delegation.

A business conference between the two countries is also one of the highlights of the trip.

President Phúc’s trip represents the ties and the respect for the traditional friendship the two countries have shown each other over the past 50 years that have been continuously cultivated, especially against the context of the ongoing COVID-19 pandemic, she said.

Việt Nam will never forget the fact that Switzerland is one of the first Western European countries to have officially recognised and set up diplomatic ties with Việt Nam in 1971 when the war had not ended, the diplomat remarked, adding that the Government and people of Việt Nam appreciate the valuable support that the Government and people of Switzerland have provided during the struggle for national independence in the past, as well as the country’s development and international integration today.

Switzerland is also one of the European countries that continues to consider Việt Nam a priority partner for development cooperation.

Switzerland’s development support for Việt Nam in the past 30 years (1991-2021) has reached more than US$600 million and the Swiss Government has pledged to continue to support Việt Nam in the 2021-24 period.

Most recently, during the official visit to Việt Nam by Vice President, Swiss Foreign Minister Ignazio Cassis in August 2021, Switzerland shared Việt Nam’s difficulties in responding to the COVID-19 pandemic and donated medical supplies worth US$5 million to Việt Nam in a show of solidarity.

The two countries, despite great differences in the level of development, economic size, as well as geographic distance, shared many similarities – especially in the focus on economic prosperity and serving the people, and the common voice in multilateral forums, especially at the United Nations, on issues related to international peace and security, international law, trade liberalization, and climate change or sustainable development.

She said Swiss businesses are paying attention to the Việt Nam, particularly welcoming its open policies and the strategic geographic and development potentials of Việt Nam, and many wished to visit and survey the business environment in Việt Nam once COVID-19 is contained.

The Vietnamese ambassador said the trip conveys a strong message of commitment to a vision of elevating the ties, bringing the two countries’ friendship to a higher level of substantiveness and depth in the coming years, across multiple fronts from politics-diplomacy to investment and trade or culture-education.

The talks between the two heads of state will generate new driving forces to realise the great cooperation potentials between the two countries, according to ambassador Linh Lan. There will be much emphasis paid to the early signing of a Free Trade Agreement (FTA) between Việt Nam and Switzerland.

She also affirmed that the trip also consolidates Việt Nam’s international integration efforts and multilateral foreign policies, one of the key pillars of the country’s foreign policy of independence, self-reliance, multilateralization, diversification of ties for peace, cooperation and development, as affirmed in the documents adopted in the 13th National Party Congress. — VNS