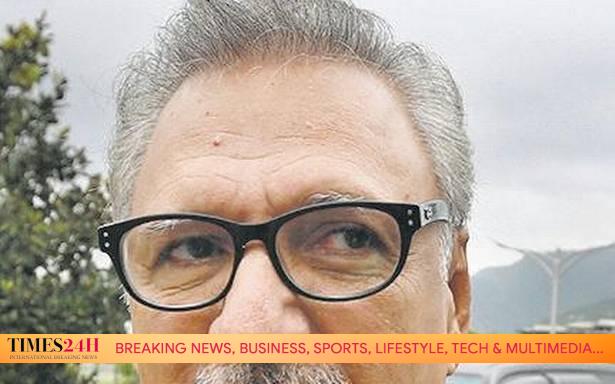 President Alvi made the comments while addressing the military parade at the parade avenue in Islamabad to commemorate Pakistan Day.

Underlining that peaceful coexistence is the cornerstone of Pakistan’s foreign policy, President Arif Alvi on Thursday said that Islamabad desires peace, security and development in the South Asian region.

President Alvi made the comments while addressing the military parade at the parade avenue in Islamabad to commemorate Pakistan Day. The parade was held two days after it was postponed on March 23 due to “inclement weather”.

Prime Minister Imran Khan was unable to attend as he is currently in quarantine after testing positive for COVID-19.

“Peaceful coexistence is the cornerstone of Pakistan’s foreign policy. The situation warrants that the leadership of South Asia reject the politics of hate, prejudice and religious extremism to guide the region towards prosperity,” Mr. Alvi said.

The President said that the resolution of the Kashmir issue is imperative for ensuring peace in South Asia.

India has previously rejected all references to Kashmir by Pakistani leaders and has also asserted that Jammu and Kashmir is an integral and inalienable part of the country.

In his address, President Alvi said Pakistan wants to move forward with good intent and peace but “our desire for peace should not be construed as our weakness.” Mr. Alvi said that Pakistan had the capability to defend its territorial integrity and befittingly respond to any misadventure.

“We will defend our independence at all costs,” he said, adding that Pakistan desires peace, security and development in the whole region and it has also taken practical steps for that.

Mr. Alvi said Pakistan is a strong nuclear power and has achieved self-reliance in defence, expressing satisfaction that Pakistan is also exporting its defence products.

He said anti-terrorism operation destroyed the terrorist networks across the country and the world also appreciates Pakistan’s successes in the war against terrorism.

The President said despite limited resources, the country handled the coronavirus situation with responsibility and discipline and will also overcome this challenge.

He said that the cooperation and collaboration between Pakistan and China is getting stronger with the passage of time and expressed gratitude to Beijing for providing COVID-19 vaccine to his country.

The event brings together the civil and military leadership and occasionally foreign leaders are also invited. The then Malaysian Prime Minister Mahathir Mohamad was the guest of honour for the 2019 edition of the parade.

The Pakistan Day event was not held last year due to the coronavirus pandemic. Between 2008 and 2014, no parades were held due to an escalation in the military’s conflict with the Afghanistan-based Tehreek-e-Taliban Pakistan (TTP). In 2015, the military resumed the parade, declaring that the terrorists were on the run since it launched an operation in 2014 to dislodge them from the restive border regions.