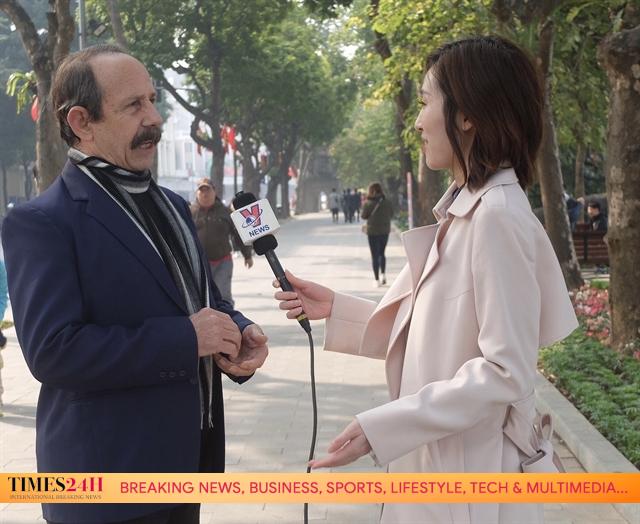 
HÀ NỘI — The 13th National Party Congress, scheduled to take place in Hà Nội from January 25 to February 2, is attracting attention both in Việt Nam and around the world, as it will mark an important milestone in setting out orientations for the country’s reforms, integration and development in the future.


Alberto Salazar, a resident reporter of the Latin American News Agency Prensa Latina in Việt Nam, told the Vietnam News Agency (VNA) that the 13th National Party Congress would have a direct impact on not only the macro-economy and society but also on each individual.


He recognised that this topic is part of people’s daily conversations. They are greatly interested in the 13th National Party Congress, as they know that decisions made will directly affect their lives.


Having worked in the Southeast Asian country for three and a half years, Salazar said he had witnessed a number of positive changes, especially new works, and he feels safer here than anywhere else in the world.


The reporter also spoke highly of the Communist Party of Việt Nam (CPV)’s direct and consistent efforts in harmoniously coordinating with the Government to steer the fight against the COVID-19 pandemic and recover the economy.


“The Communist Party has exerted every effort to ensure that even in the most trying of times, like fighting the pandemic, Việt Nam remains among very few countries to post positive growth and guarantee social security,” he said.


Việt Nam’s economy grew 2.91 per cent in 2020 despite the pandemic – a pace many countries would envy even in normal times, Salazar noted, adding that most international organisations predict it will expand 6 per cent this year.


In the interview, the Prensa Latina correspondent also highlighted Việt Nam’s success as ASEAN Chair in 2020 despite the COVID-19 crisis. It held many teleconferences and phone talks with leaders of countries in the region and the world to coordinate the pandemic response strategy and maintain contact.


Việt Nam also proposed many initiatives during the first year of its non-permanent membership of the UN Security Council for the 2020-2021 period, including securing recognition of December 27 as the International Day of Epidemic Preparedness, which was supported by all member states.


Its already high position in the international arena was enhanced after the successful fulfilment of these dual roles last year, he said.


He also assessed preparations for the 13th National Party Congress as being swift and effective, which will ensure its success.


As the resolution of the upcoming National Party Congress will guarantee both the present and future of the country, and the event will also issue a vision for the country’s international integration process, he believes that Việt Nam, which has long been respected by the world, will secure an even higher standing in the years to come. — VNS