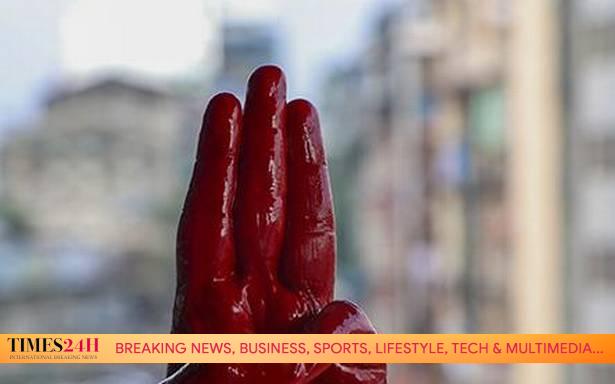 Myanmar activists daubed roadways with red paint Tuesday to protest against the junta’s bloody crackdown on protests, as an online fundraising drive to support the movement neared the $10 million mark.

The country has been in turmoil since the military ousted civilian leader Aung San Suu Kyi on February 1, rocked by daily clashes between protestors and authorities that have left at least 570 people dead.

Ten of Myanmar’s ethnic rebel armies voiced support for the protest movement at the weekend, stoking fears that the country could slide into broader civil conflict, while the UN has warned of a looming “bloodbath”.

On Tuesday, in the commercial capital Yangon, people smeared red paint and handprints on bus stops and pavements in protest at the military’s violence. The so-called “bleeding dye strike” is the latest creative method thought up by protestors to voice opposition without risking being shot or arrested by demonstrating in person.

One slogan painted on a bus stop said the military was being misused to protect junta chief Min Aung Hlaing, and urged soldiers not to shoot civilians.

In the city of Hpa-an in eastern Karen state, youths sprayed red paint on the road, giving the three-fingered salute borrowed from the Hunger Games books and films that has become symbolic of the movement.

Tuesday also saw rallies in the second biggest city Mandalay, as well as in Karen, and Kachin State.