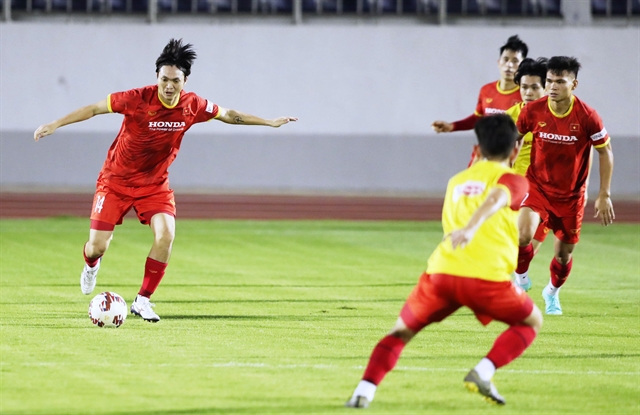 Nguyễn Tuấn Anh (left) seen in a training with his teammates for the AFF Cup 2020. — Photo feed24h.net


HÀ NỘI — Talented midfielder Nguyễn Tuấn Anh is likely to have his first opportunity with the Vietnamese national team to play in the AFF Cup 2020.


Anh’s knee injuries have deprived him of the opportunity to play at two previous AFF Cup tournaments in 2016 and 2018. If Anh can return to full fitness, he may well shine at the event in Singapore from December 5, 2021 to January 1, 2022.


Among the players of the first generation of Hoàng Anh Gia Lai (HAGL) Academy, Anh seems to be the most unlucky because a long-lasting injury caused him to miss many opportunities to participate in some important tournaments for the Vietnamese team. Favourite players of HAGL such as Nguyễn Công Phượng, Nguyễn Văn Toàn, Lương Xuân Trường, Vũ Văn Thanh have all played in both the AFF Cup 2016 and then the triumphant side that won the AFF Cup in 2018, while Anh missed out.


Five years ago, coach Nguyễn Hữu Thắng wished Anh could recover from his knee injury in time to attend the 2016 AFF Cup. Thắng even brought Anh to Myanmar, the hosts of the Cup, in the hope he could feature in the last minutes.


In early 2018, another injury ruled Anh out of the U23 Việt Nam side that won the AFC U23 Championship 2018. Bad luck continued to follow him.


At the beginning of the 2018 V.League 1 season, he suffered a knee injury in the match between HAGL and Hải Phòng so his hopes of appearing at  the Asian Games 2018 and then AFF Cup 2018 were dashed.


Tuấn Anh is the player with the most injuries in Vietnamese football. His legs have even earned the nickname “crystal” because he appears so fragile.


After a long period on the treatment table, in September 2019, he returned to the Vietnamese national team and played very impressively in the second qualifying round of the World Cup 2022.


At the third qualifying round of the 2022 World Cup, fitness is still Anh’s biggest problem, but now, ahead of the 2020 AFF Cup, he is in good shape. It will not be surprising if he is selected to attend the AFF Cup for the first time in his career. VNS