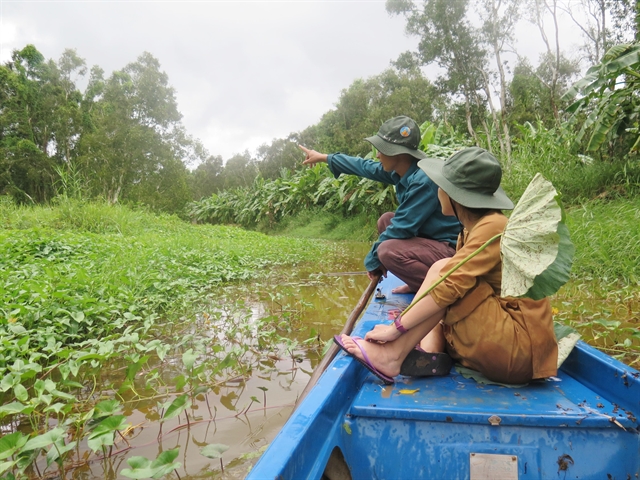 
MEKONG DELTA — Local authorities and environmental organisations in the Mekong Delta are making efforts to preserve and develop ecosystems vulnerable to the impacts of climate change.


Located in southern Việt Nam, the Mekong Delta has a diverse and unique ecosystem including marine ecosystems, islands, estuaries, wetlands, mangroves, delta islands, along with many biosphere reserves, national parks and nature reserves.


The preservation, development and responsible exploitation of resources from unique ecosystems are vitally important for localities in the region, contributing to environmental protection and climate change adaptation.


According to the People’s Committee of Kiên Giang Province, to enhance the conservation of marine and island ecosystems, the committee has launched a project to investigate and survey the status of biodiversity and adjust the area of ​​subdivisions in the protected area in Phú Quốc marine reserve, Phú Quốc City.


Since the end of 2017, the province has planted more than 540ha of mangrove forests.


Also located in the Mekong Delta, Cà Mau Province is home to a world Ramsar Site, meaning it has been designated to be of international importance.


The U Minh Hạ National Park located in the Ramsar Site, one of the three wetland conservation sites in the Mekong Delta, has a total core area of ​​8,527ha and a buffer zone of 25,000ha.


Many projects have been implemented at the park including planting and restoring native timber forests, building fire forecasting models and ensuring water balance to protect biodiversity.


Huỳnh Minh Nguyên, director of U Minh Hạ National Park, said to preserve forest ecosystems and biodiversity with many species of flora and fauna, the park management board has received and released into the forest area many rare and native animals of U Minh Hạ Forest, such as the golden python – a wild animal named in Việt Nam and the world’s Red Book and belonging to endangered, precious and rare species.


The site holds an exploration tour in which visitors can make bees’ nests and harvest honey. Tour guides always have to follow forest protection rules to avoid forest fires and harm to the living environment of animals, he said.


On Phú Quốc Island, a beach cleanup campaign on the first Saturday of every month has run since mid-2019 and has been joined by not only local residents but also tourists.


Hotels and resort owners in Phú Quốc have also helped protect the environment and preserve the marine ecosystem by reducing the use of plastic bottles and straws, as well as giving eco-friendly shopping bags to tourists. — VNS