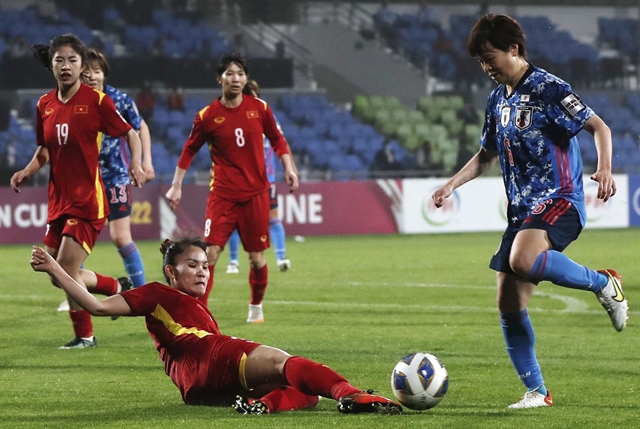 Việt Nam vs Japan in their second Group C match of the 2022 AFC Women’s Cup in India on Monday. Việt Nam lost by three goals to nil. —Photonews.fox-24.com

HÀ NỘI — Despite a heavy loss to Japan, head coach Mai Đức Chung of the Vietnamese women’s team said his players did their best and will continue to work hard in the last match against Myanmar.

Việt Nam lost to the defending Asian champion, Japan 0-3 on Monday in their second Group C match of the 2022 AFC Women’s Cup in India.

Speaking after the match, coach Chung highly appreciated his team’s spirit against a strong opponent.

He said: “We were unfortunately affected by the COVID-19 pandemic before participating in the tournament and met two strong opponents, Japan and South Korea.

“But just like the match against South Korea, the Vietnamese players continued to keep their fighting spirit. I think the match was still successful because the level of Vietnamese players is still limited and affected by the coronavirus. The whole team tried their best in this match.”

Like the 0-3 loss with South Korea last Friday, Việt Nam entered the game with the hope of limiting the number of goals to raise the hope of progressing into the knockout stage.

Playing against a strong rival who now rank No.1 in Asia, the Vietnamese team could barely hold the ball long enough to create any chances.

Chương Thị Kiều and her teammates performed hard to fend off their opponents’ attacks and conceded only one goal in the first half.

The Japanese women were in good form, played with confidence in the second half and scored two more goals to extend their lead.

After two defeats, Việt Nam have no points, however, Chung emphasized that Việt Nam will do their best in the last match against Myanmar tomorrow where a draw should be enough to progress to the knock-out stages

“If we had given up, we would have quit from the beginning,” Chung said.

“The match against Myanmar will see us facing an opponent of a similar level in Southeast Asia. Myanmar are luckier than us when they are not affected much by the COVID-19 pandemic. We will try our best in this last match.

“Obviously, the level of the two teams is similar and Myanmar will definitely play offensively. We will have a specific strategy in this match. After the last two matches, I hope Vietnamese players continue to regain their strength and focus for the final group game.”

After two Group C matches, Japan and South Korea qualified for the quarter-finals after gaining six points but Japan stayed on top on goal difference.

Meanwhile, Việt Nam and Myanmar were at the bottom with two losses. However, Việt Nam now rank above Myanmar on goal difference and they just need a draw in their last match against Myanmar to give them a chance to enter the quarter-finals. — VNS