Joe Biden announces all adults in U.S. eligible for COVID-19 vaccine by April 19 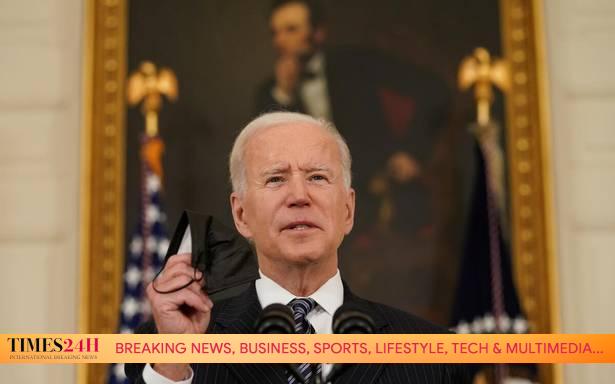 It would not necessarily mean that anyone could get a shot immediately, as distribution remains a work in progress.

All adults across America will be eligible for COVID-19 vaccines within two weeks, President Joe Biden announced on Tuesday, as economic powerhouse California set a June 15 target to fully reopen businesses.

The positive news from the United States — which has reported the most coronavirus deaths of any country but is now a leader in vaccine distribution — contrasted with a record daily toll in Brazil and Europe’s troubled rollout of the AstraZeneca shot.

Mr. Biden announced in a White House speech that he is moving up the deadline for all over 18s to be eligible for vaccines to April 19. The previous target had been May 1.

Mr. Biden’s April 19 deadline means ending restrictions by age, health issues or other categories for people wanting to get vaccinated.

It would not necessarily mean that anyone could get a shot immediately, as distribution remains a work in progress.

Visiting a vaccination site in Virginia earlier, Mr. Biden said that while the worst of the pandemic is “not over yet,” vaccines mean it soon could be.

The news comes as California Governor Gavin Newsom said the state will fully reopen by June 15 if the current rate of vaccinations continues, lifting all COVID-related restrictions on businesses and gatherings.

“We’ll be getting rid of the blueprint, as you know it today. That’s on June 15 if we continue the good work,” said Mr. Newsom, adding that mask-wearing requirements would remain.

Some 556,000 Americans have died from COVID-19, by far the highest toll reported in any country.

On Tuesday the Johns Hopkins University tracker reported 68,643 new confirmed cases and 1,105 deaths, as concern grows that people may be letting down their guard.

The International Monetary Fund meanwhile said accelerated vaccines and a flood of government stimulus spending, especially in the United States, meant it now predicts global economic growth this year of 6%, up from a forecast of 5.5% in January.

This would be a swift reversal of the 3.3% contraction in 2020 caused by the COVID-19 pandemic — the worst peacetime downturn since the Great Depression nearly a century ago.

And on a global scale it has not yet abated, despite more than 660 million shots having been administered worldwide.

In an annual report on Wednesday, Amnesty International said that richer countries are failing a “rudimentary” test of global solidarity by hoarding COVID vaccines, “leaving countries with the fewest resources to face the worst health and human rights outcomes.”

Hard-hit Brazil registered 4,195 deaths from the virus on Tuesday, in the deadliest day of the pandemic yet for a country whose total reported toll is now nearly 337,000, second only to the United States.

Elsewhere in Latin America, Argentina notched a record high new daily cases with 20,870 infections, and across the border in Chile a coronavirus surge forced President Sebastian Pinera to postpone an election to choose a commission to rewrite the country’s constitution.

Meanwhile India, a vaccine-producing powerhouse, is struggling to contain a record surge in daily infections.

A rare breakthrough in reopening international travel occurred however when Australia and New Zealand — both largely free of the coronavirus — announced a two-way, quarantine-free travel corridor starting April 18.

Britain is among the global pace-setters for inoculations with almost half its population having received at least one jab.

In stark contrast, many other countries in Europe are lagging behind and have been forced to reimpose deeply unpopular shutdowns to battle stubbornly high caseloads.

One problem in Europe has been a wave of concern over the safety of the AstraZeneca vaccine and its reported links to blood clots.

The European Medicines Agency said on Tuesday it has not yet reached a conclusion on whether there is a causal link and said it plans a press briefing later this week.

And as global regulators rush to assess the jab’s possible link to rare blood clots in adults, a British trial of the vaccine on children was put on hold on Tuesday.

Oxford University, which helped develop the vaccine, said in a statement that there were “no safety concerns” in the trial, but acknowledged fears over a potential link to clots.