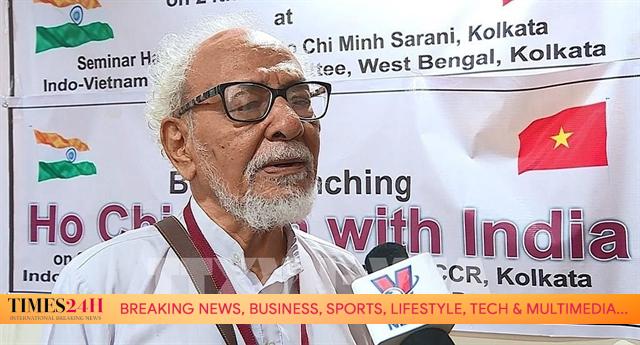 The 89-year-old Indian scholar and journalist has paid 29 visits to Việt Nam. He reminisced his visit to the Southeast Asian country in 1982, during which he met a college student.

“I was deeply touched when a college student told me that he was proud of the poverty since it was shared by all the fellow countrymen and optimistically he added that soon they would overcome,” Sharma said. “He had full faith in the leadership of the CPV.”

In 1986, the CPV adopted the policy of “Đổi mới” (Renewal) and opened its economy, he recalled, since then the slogan “Việt Nam changes every day” has become extremely popular among the people. “It was not only a mere slogan but a ground reality that I witnessed during my twenty-nine visits to Việt Nam on various occasions.

He moved on to say that in every Party Congress, leadership and workers of the Party took stock of the previous five years’ all-round development and adopt a policy of further development in the next five years.

Việt Nam, that was far behind, is a fast developing country today, politically, economically and culturally, he said.

“The total credit for Việt Nam’s all-round development and its economic and cultural upliftment goes to the farsightedness and its implementation to the CPV which is inspired by the great ideas of President Hồ Chí Minh,” he continued.

He added that the Vietnamese government and CPV have also largely been credited for the country’s success in containing the COVID-19 due to their swift decision-making, effective public health messaging and aggressive contact tracing; while Vietnamese patriots wholeheartedly and actively cooperated with the Party.

He further said that the 13th National Party Congress is taking place in a very crucial and challenging period. He believed it will take right decisions in a right direction to overcome all challenges and continue with anti-corruption campaign. — VNS