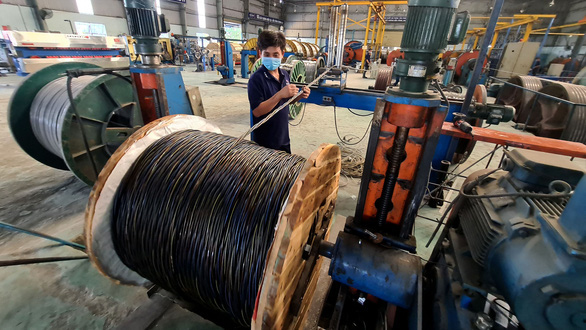 A worker at a steel plant in HCM City. The city wants the Government to cut taxes to support companies affected by the COVID-19 pandemic. — Photo courtesy of tuoitre.vn

HCM CITY — The HCM City People’s Committee has made several suggestions for a Ministry of Finance decree to support businesses and individuals affected by the COVID-19 pandemic, including ensuring bank lending rates are no more than 2 per cent higher than deposit interest rates.

It called for cutting corporate income tax by 50 per cent for businesses with annual revenues of less than VNĐ200 billion (US$8.8 million) this year and by 30 per cent for 2022 and 2023.

It said the costs of testing workers, medical treatment, food and living costs, and personal protective equipment such as masks should be tax deductible.

It called for waiving income tax, value added tax, natural resources tax, and environmental protection tax on household and individual businesses in the second half of 2021 and the next two years, and income tax for some employees.

It sought a halving of value added tax for the last three months of this year and the next two years.

The deadline for filing tax should be extended until the second quarter of next year without penalty for late payment, it said.

It suggested that the land rent payable should be cut by 50 per cent for all businesses this year, and fully waived for tourism and related businesses.

Procedures to borrow from banks and rolling over debts should be simplified, it added. — VNS