Athletes compete at the National Athletics Championship at the Mỹ Đình Stadium in December. Pre-SEA Games athletics tournament will be held to test facilities and equipment for the 31st SEA Games. — VNS Photo Triệu Linh


HÀ NỘI — Honesty, integrity and above all else – fair play.


That’s how Việt Nam wants the Southeast Asian (SEA) Games to pan when the country hosts the event in May.


In the past, Việt Nam has finished in the top three overall in the medal count, at many previous SEA Games and this time around they expect nothing less.


“This year, as the hosts, our goal is the same. Apart from that, we will have to make sure a regional best fair-play event following an order from Deputy Prime Minister Vũ Đức Đam.


“We will not try to earn gold medals at all costs. We will not follow a tradition of SEA Games of adding the hosts’ strong sports which other countries are not familiar with in the competition list to grab as many titles as possible. We will strive for the highest position under fair conditions.”


Yến said athletics and swimming were the disciplines in the past where Việt Nam shined, and they hope for repeated success on home soil.


Việt Nam will also try best to defend titles in the men’s and women’s football events.


Yến confirmed that SEA Games will be a warm up and preparation of Vietnamese athletes for the Asia’s biggest event of 19th Asian Games (ASIAD) which is organised in Hangzhou, China, in September.


“Another goal of Việt Nam is to at least maintain our results of athletics and swimming in the 2022 ASIAD, and if it is possible we can lift them to higher levels,” said Yến.


Almost 10,000 athletes, coaches, officials and referees will visit Việt Nam from May 12-23 to compete in Hà Nội and 11 surrounding cities and provinces. 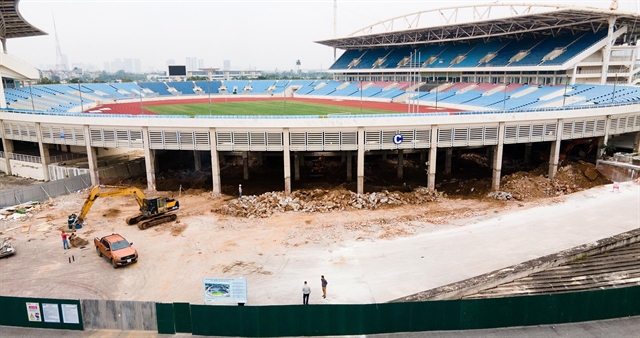 Mỹ ĐÌnh Stadium has been upgraded to host many activities including opening and closing ceremonies of the 31st SEA Games this May. — Photo nhandan.vn


At the Tuesday’s meeting, Việt Nam briefed delegations’ representatives about key lines of organising and preparing activities as well as difficulties such as the ongoing pandemic .


Competitors must have at least two vaccination shots before landing in Việt Nam. They will be tested every 72 hours to ensure safety throughout the tournament.


There is no Athlete Village in these Games. All teams will stay in hotels and will be supported by about 3,000 volunteers. Everyone must follow the bubble model in training and competing and non-contact rules between delegations.


Organisers also said they have built different plans to open doors for supporters to the competition venues depending on the development of COVID-19.


Some pre-SEA Games competitions will be held to test facility, equipment and warm athletes up ahead of the Games.


The biennial biggest Games of the south eastern Asian region was originally slated in November 2021 but was rescheduled to this May due to coronavirus concerns.


The pandemic is still spreading complicated in the country especially in the capital city recently but all host cities and provinces have promised SEA Games will be organised safely and economically, and showed their great effort to make sure its success. — VNS