Google is Releasing a More Inclusive Handshake Emoji, Includes Multi-Skin Tone Options — Why Did it Take so Long?

It has been years since Apple and Google started embracing diversity through their emojis. But the handshake, since then, has been left unchanged due to a complex hurdle. Finally! Google will be releasing multi-skin toned options in 2022.

The handshake emoji, centering on diversity and inclusivity, will be displaying 25 new skin tone options. It will allow users to change the left and right hand’s colors.

The new alteration sounds simple as it looks, but it took some courage to see the day of light.

Daniel first proposed the idea to Unicode in 2019.

She claims that the idea and the possibility of it happening is there, but the “how” is a massive blur during the early stage.

Daniel added that “the group appeared to be stuck on how to make it happen.” 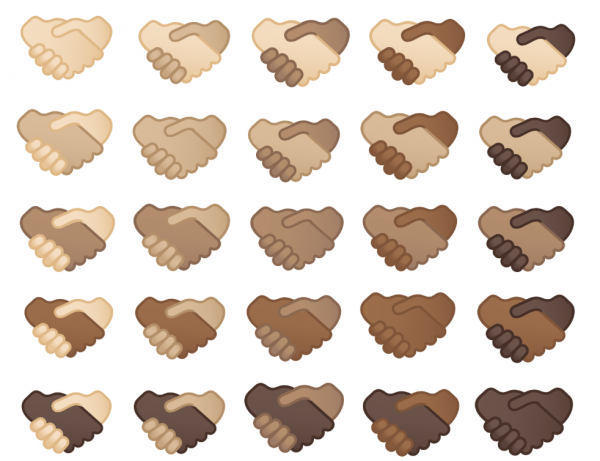 Why the Multi-Skin Tone Handshake Emoji Took Years to Make

The skin tone modifier used in other emojis would not work for the handshake because the latter includes two hands.

The former technology would then make both hands the same color, emoji historian and founder of Emojipedia, Jeremy Burge said via The New Web.

Burge added that “this has been the main reason that until now all emojis with two or more people didn’t support skin tones.” The handshake would also need new code points per hand to employ two colors.

Creating an emoji, according to Daniel of Google, takes two years to produce. The two-toned handshake will need more as it is not a regular one.

The coding process of an emoji becomes more complex as it comes with more forms — like gender and skin-tone options, Daniel said.

The Covid 19 pandemic has been a big hurdle for almost everyone. And emojis are not spared.

Unfortunately, it delayed the Unicode deployment for six months. The release has been moved next year.

Emojis started to embrace racial diversity in November 2014. Apple and Google proposed it to have various skin tones to the Unicode Consortium. The proposal ignited a trend that would change how we communicate.

The rollout of gender-inclusive and racially diverse emoji on Facebook happened in June 2016, two years after the proposal. The social media giant included female characters and multiple skin tones.

Messenger took it to a new level when they also gave an option to change the hair color. It was also the first time that redheads were represented through emojis.

US lays out new guidelines for vaccinated international travelers