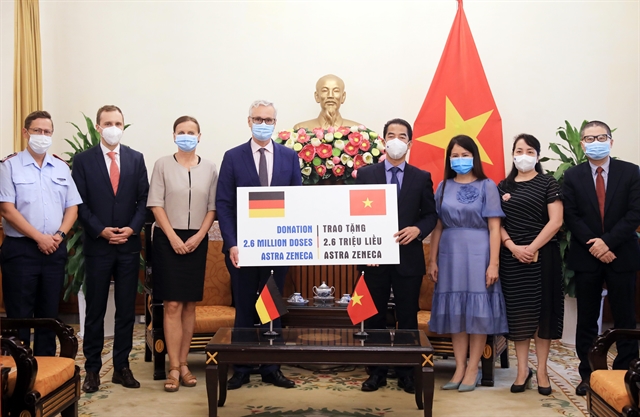 HÀ NỘI — Germany has donated a further 2.6 million doses of AstraZeneca to Việt Nam, the second time in two weeks that the country has supported Việt Nam in the fight against the COVID-19 pandemic.

The donation comes from German stockpiles and follows an offer made by German Chancellor Angela Merkel to Vietnamese Prime Minister Phạm Minh Chính.

German Ambassador to Việt Nam, Guido Hildner, said “This is the second delivery of vaccines from Germany within two weeks. Together with the COVAX shipment on 16 September, Germany’s support to Việt Nam now totals 3.45 million doses of vaccine.”

“This support is an expression of our solidarity with the people of Việt Nam. It also underscores our commitment to the Strategic Partnership with Việt Nam, whose 10th anniversary we are celebrating this year. Germany stands with Việt Nam in fighting and overcoming the COVID-19 pandemic.”

In addition to vaccine donation, Germany and Việt Nam has been working closely in disease prevention. In early 2020, the Vietnamese Government supported Germany with more than 100,000 masks. In the summer of 2021, a number of German states donated to Việt Nam a total of one million antigen rapid test kits as well as masks, protective clothing and specialised refrigerators. — VNS