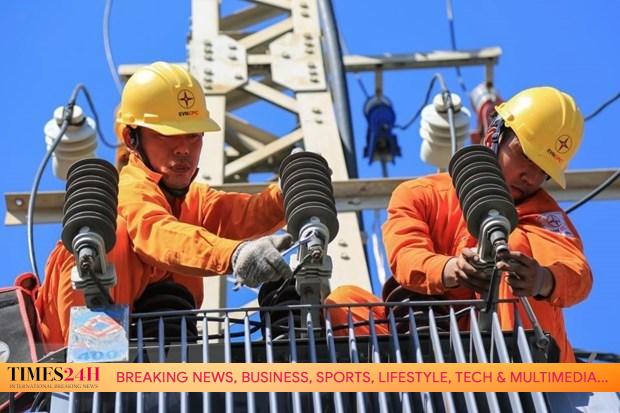 EVN engineers work on the national grid.  The National Load Dispatch Center (A0) asks  EVN i for more infrastructure to launch a competitive retail electricity market in 2021. — VNA/VNS Photo

HÀ NỘI — The National Load Dispatch Center (A0) has asked Vietnam Electricity (EVN) to equip it with better infrastructure for the operation of a future wholesale and retail electricity market with more renewable energy resources.

A representative of the centre said: “Wind and solar power plants have been put into operation on a large scale but data on their scale and generating capacity is not yet accurate.”

The representative added that rooftop solar power, with a capacity of up to 9,583 MWp, was affecting the load chart, making it tough to plan the power system operation as well as the market, especially due to the limitations of the transmission grid, particularly the 500kV / 220kV grid in the north.

The centre also said the operation processes of the hydroelectric plants with a capacity of more than 30 MW had shortcomings to fit with electricity market regulations.

As the future infrastructure will convert the transaction cycle from 60 minutes to 30 minutes, while the core software has reached its limit, the centre has asked EVN to soon install new tools.

Leaders of A0 also suggested the EVN consider offering supporting services for electricity loading and dispatch to develop the market.

It also asked EVN to approve its plan for upgrading and expanding the existing infrastructure systems such as SCADA / EMS to better collect metering data due to the sudden development of renewable energy for the wholesale electricity market and the growing requirements for energy security.

At the same time, it asked EVN to equip the Electricity Market Management System (MMS) system for after 2022 to ensure the infrastructure for the wholesale/retail electricity market with renewable energy.

Speaking to the Vietnam News Agency, A0’s representative said in 2021, it would set up better systems to improve the economic efficiency of the electricity system and minimise electricity costs for the country, adding it would develop the information technology infrastructure for the future for the wholesale electricity market.

The centre also planned to complete the project of upgrading the IT infrastructure to serve the competitive wholesale electricity market of Việt Nam (VWEM) in 2020-2022 as well as apply open-ended technical innovations and scientific research.

The centre said it would improve the quality of short-term and long-term load forecasting for uncontrollable power sources including renewable energy, rooftop solar power and wind power sources.

Regarding human resources, A0 would recruit new engineers and improve the existing ones with more quality training to meet the requirements of a wholesale electricity market.