Disney just teased a realistic “Star Wars” lightsaber replica with glowing blades that actually extend and retract at will.

The lightsaber reveal comes on Star Wars Day, as part of Disney’s announcement about the opening of its upcoming Star Wars: Galactic Starcruiser resort in Florida, which has been delayed until 2022.

To commemorate the titular movie franchise, Star Wars Day is celebrated on May the 4th as a wordplay of the iconic phrase “May the Force be with you.”

Disney’s Star Wars Lightsaber: How Close Is It To The Real Thing?

The lightsaber replica, created by Walt Disney Imagineering Research and Development, was first introduced at a private virtual news conference held on Apr. 8.

According to the lightsaber patent granted in September 2018, the replica uses two widened strips of plastic with a strip of LEDs running down the middle to create the glow.

Star Wars: #GalacticStarcruiser at @WaltDisneyWorld Resort will take you to a galaxy far, far away starting in 2022 for an all-immersive, vacation experience 💫 What exactly does “all-immersive” mean? Well, here’s a little hint… https://t.co/mitmfBRW8t #MayThe4thBeWithYou pic.twitter.com/Wo11937V4b

The plastic strips wrap around each other to create a compact cylinder and are extended and retracted by a motor located on the lightsaber’s hilt.

Prior to Disney’s reveal, the closest lightsaber replica comes from Hacksmith Industries.

Hacksmith Industries’ lightsaber, which uses a propriety hilt attached to liquid propane gas and oxygen gas tanks, can generate a plasma beam that heats up to 2,204 °C (4,000°F).

The lightsaber design even earned the Hacksmith Industries team an official Guinness World Record in December 2020.

Hacksmith Industries founder James Hobson, along with fellow inventor Bogdan Malynovskyy, made the lightsaber as part of a mission to bring fiction to reality.

While Star Wars-related games went on sale in celebration of May the 4th, Disney announced the launch of its upcoming resort in 2022.

Disney also promises to have its guests experience what it’s like aboard the massive Halcyon starcruiser and interact with “an eclectic group of characters both familiar and new.”

Guests will also be given the opportunity to train with the lightsaber as teased on the resort’s artist concept. 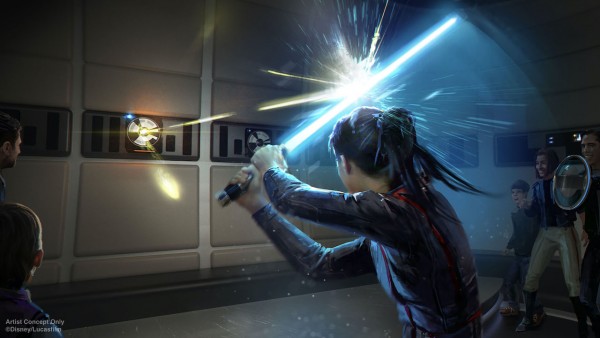 The Star Wars-themed resort will also feature a supper club named the Crown of Corellia Dining Room, which pays homage to the planet where the Halcyon starcruiser and the Millennium Falcon came from.

While not explicitly explained on the blog, its official site said that guests are meant to stay at the resort for two days to fully enjoy the “Star Wars” experience.

Related Article: LOOK: Hyundai’s Star Wars-Looking Car ‘Elevate’ Has Legs Allowing You to Speed up on Roads and Climb Terrain!