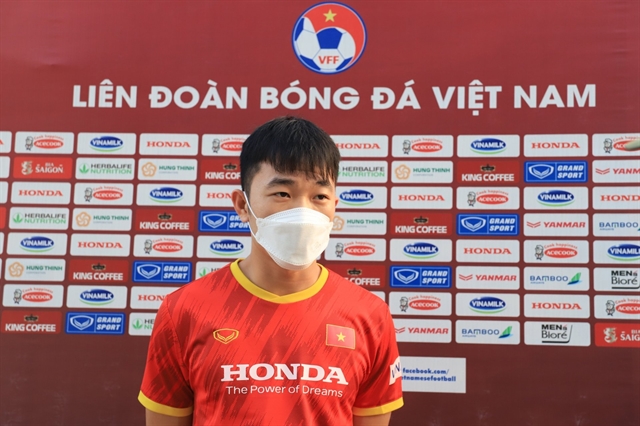 
HÀ NỘI — Midfielder Lương Xuân Trường said he confident the national team will be able to score goals against Japan when they face off next week in the World Cup qualifiers.


And despite their opponents being one of the top teams in Asia, Trường feels they could be vulnerable on the counter attack.


The two teams meet on November 11 at the Mỹ Đình National Stadium with Việt Nam still to register any points in this qualifying campaign.


“The coaching staff and players have been watching videos of Japan’s matches,” said Trường.


“They are a top-class team from this continent. Facing Japan at home, I think we need to play tight, defend resiliently and wait for the right time to counter attack.”


The midfielder from Hoàng Anh Gia Lai Club has played three of the four matches in the campaign so far against Saudi Arabia, China and Oman.


“Việt Nam team haven’t got any points in the last matches, but we did score goals. This will be a difficult game against Japan but it is not impossible to get a result. We remain optimistic and we hope to be able to get the first goal,” said Trường.


Midfielder Đỗ Hùng Dũng has returned to training with the national team after he recovered from an injury.


Trường said his presence has lifted the spirits in the camp.


“I am very happy because Dũng trained hard to overcome his serious injury,” he said.


“The whole team are also very happy to welcome him back. As for the competition for positions, of course every player wants to play. Those who are in good form will be in contention to play.”


Việt Nam will have the addition of eight players from the U23 team after they successfully qualified for the AFC finals.


Trường was part of the youth team that made history in 2018 when they reached the final. He said he believes that tournament will help him and other players grow.


He said: “For me, the AFC U23 event is a very meaningful tournament to help young players to grow up more. Players doing well in the AFC tournament will have a good future.”


After facing Japan, Việt Nam will play Saudi Arabia on November 16. Both matches will kick off at 7pm at the Mỹ Đình National Stadium in Hà Nội. Around 12,000 fans will be allowed inside the stadium. VNS