Coronavirus | Amid surge, PM stresses on the need to ‘test, track, treat’ more 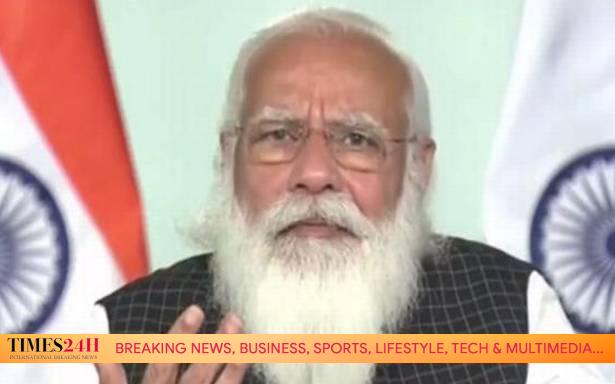 “People and administration both seem to have become casual and this has increased our troubles,” the Prime Minister said.

Amid growing concerns over vaccine shortage, Prime Minister Narendra Modi on Thursday told Chief Ministers of States that the surge of COVID-19 — crossing peak levels of the first wave — required a firm strategy of “Test, Track and Treat” while seeming to rule out any kind of large scale lockdown.

Intensive testing, testing 100% in well-defined micro containment zones, tracing at least 30 contacts of every positive case and ensuring that all eligible people were vaccinated was the strategy required, Mr Modi said.

The Prime Minister was addressing chief ministers online as the country battles a massive second wave of COVID-19 infections. He stressed the need to demarcate specific micro containment zones, almost ruling out large scale lockdown of towns and cities.

Mr Modi pointed out that during the last year when the pandemic first hit, the country was facing challenges of not having either enough testing labs, Personal Protection Equipment (PPE) kits, ventillators and oxygen.

“Now, at least we have the experience and access to these resources when we take on this second wave,” he said.

He admitted that the long battle against COVID19 may have led to “COVID fatigue” among people and local administration, but that it needed to be gotten over and urged that governors of States and civil society members, people of influence be roped in to emphasise COVID appropriate behaviour again.

“As far as night curfews are concerned, we must call them Corona curfew to stress the reason why this has become neccessary,” he said.

Mr Modi also suggested that a “Teeka Utsav” (Vaccination Festival) be organised between April 11 (birth anniversary of social reformer Mahatma Jyotiba Phule) and April 14 (birth anniversary Dr. Bhimrao Ambedkar) as a way of ensuring maximum vaccinations of those eligible. “A set out festival like this can be used to motivate many people to get themselves vaccinated,” he said.

Addressing the issue of shortage of vaccines raised by several States, the Prime Minister again urged that strict testing and raising the share of testing by RTPCR to 70% of all tests be undertaken, stating “vaccination will be a long process which will go on side-by-side.”

“If you look at the way rich countries with easy access to vaccinations have carried their vaccination drives, you will find that India too has more or less followed the same pattern. I urge the youth, instead of waiting for the vaccine, to not just follow COVID-19 appropriate behaviour, but also urge others and help those with less digital literacy and in the eligible category to be vaccinated,” he said.

“For those politicising the handling of vaccination or the pandemic, they can continue to do so, I am here to serve the people,” he said, an oblique referrence to several chief ministers, especially in Maharashtra and Punjab who have said they are running out of vaccines.

According to sources present at the meeting, Maharashtra Chief Minister Uddhav Thackeray did raise the issue of vaccine shortage, and also asked for Centre to permit the production of vaccines at the Haffkine Training and Research Institute.

Sources also said that Union Health Secretary Rajesh Bhushan’s presentation at the meeting underscored that vaccine availability was tied to currently limited manufacturing capacity. “We were told, however, that more candidates like Sputnik etc are being considered for use in India,” said an official present at the meeting.

Sources also said that Union Health Secretary Rajesh Bhushan’s presentation at the meeting underscored that vaccine availability was tied to currently limited manufacturing capacity. “We were told, however, that more candidates like Sputnik etc are being considered for use in India,” said an official present at the meeting.

Odisha Chief Minister Naveen Patnaik asked for a buffer of 10 days as vaccine stock for his State. “We are currently able to vaccinate 2.5 lakh persons per day and have the capacity to increase further. We request that at least a 10-day stock of the vaccine should be ensured for Odisha,” Mr Patnaik said. Chhattisgarh Chief Minister Bhupesh Baghel said his state required a buffer of at least a week’s stock of vaccines.