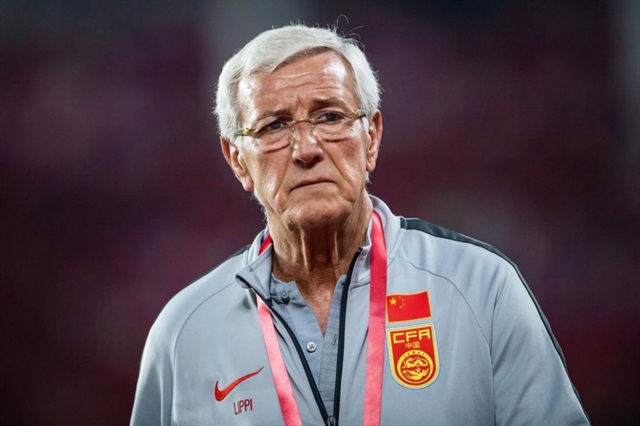 
HÀ NỘI — The former manager of the Chinese national team, Marcello Lippi, is sceptical of their chances of qualifying for the 2022 World Cup after two defeats against Australia and Japan, saying that an unsustainable development plan is holding back the country’s football.


In recent years, China has been investing big money to turn the country’s World Cup dream into reality once again, after they entered the biggest stage in world football for the first time 19 years ago in Japan and South Korea.


Billions of dollars have been spent on advanced facilities, world-class coaches and naturalising international players.


Amongst the stars, World Cup-winning manager Marcello Lippi was brought in to manage the side.


After helping Italy win the World Cup in 2006, Lippi left Europe for China in 2012 to take over Guangzhou Evergrande. He helped the team dominate the Chinese Super League, winning three league titles and the AFC Champions League trophy in 2013.


The Chinese Football Association (CFA) offered the Italian a contract with the national team in 2016, with the goal of qualifying for the World Cup for only the second time.


However, Lippi and the Chinese team parted ways for the second time in 2019, their goal unachieved.


Speaking to La Nazione in Italy, Lippe shared his thoughts on the current situation of his former team, casting doubt on their chances of qualifying for the 2022 World Cup.


“Chinese football is not as good as it’s advertised,” said Lippi.


“It is too early to judge the possibility of success for this team. If the performances don’t improve soon, it’ll be difficult for China to host the World Cup, even though the stadium and facilities here fully meet the FIFA requirements.”


Lippi argues that this method is a “shortcut” and unsustainable. Only two players in the Chinese squad for the third qualifying round of the 2022 World Cup are under the age of 23: Guo Tianyu (22 years old) and Zhu Chenjie (21 years old).


“Chinese football has great potential and infrastructure. But when I first came to the country, no club had a youth training department,” Lippi said.


“I asked every club to form a youth team, with a group of players from 12 to 19 years old.


“There’s still hope. Young people in China are very interested in European football. Many of them have dreams of becoming professional footballers.


“The lack of Chinese football perhaps is to turn their glorified football from TV promotions into realistic plans.” VNS