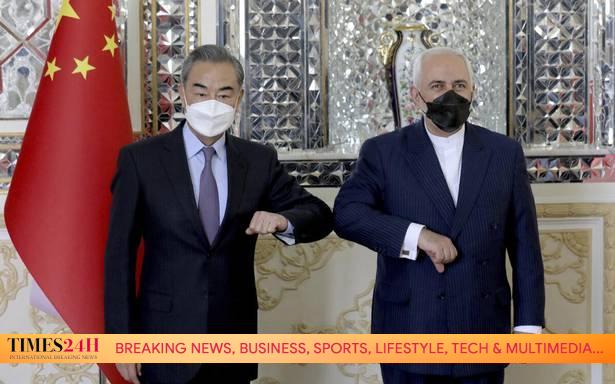 The agreement comes amid a major push from China to back Iran which is reeling under the weight of U.S sanctions.

The deal, which has been in the works for five years, was signed between Mr. Wang and his Iranian counterpart Javad Zarif, Agence France-Press reported from Tehran. Mr. Wang is visiting Saudi Arabia, Turkey, Iran, the UAE, Bahrain and Oman.

The agreement comes amid a major push from China to back Iran, which counts on Beijing as its largest trading partner, as it deals with the continuing weight of sanctions re-instated following then U.S. President Donald Trump’s decision to withdrawal from the Iranian nuclear deal. Earlier this week, China and Russia called for the U.S. to “unconditionally return to the Joint Comprehensive Plan of Action (JCPOA) as soon as possible and revoke the unilateral sanctions against Iran” as their Foreign Ministers met in China. In this context, they proposed “the establishment of a regional security dialogue platform to converge a new consensus on resolving the security concerns of countries in the region.”

Chinese and U.S. officials also held talks on the Iran nuclear deal on Thursday. Vice Foreign Minister Ma Zhaoxu, who held a phone conversation with U.S. Special Envoy for Iran Robert Malley, said that with “new changes in the Iranian nuclear situation, all parties need to increase the sense of urgency” and “the U.S. side should take concrete actions as soon as possible and both the U.S. and Iran need to meet each other half-way for the latter’s return to compliance at an early date”.

“China will continue to play a constructive role in bringing the Joint Comprehensive Plan of Action back on track,” he said.

While details of the new 25-year pact were not immediately available, it includes  “political, strategic and economic” components, AFP reported, quoting Iran’s Foreign Ministry spokesperson Saeed Khatibzadeh as saying “this document can be very effective in deepening” relations and would establish a blueprint for “reciprocal investments in the fields of transport, ports, energy, industry and services.”

He said China was keen to deepen its Belt and Road Initiative in the region, “expand areas of growth such as high and new technologies”, as well as “look forward to early conclusion of a free trade agreement with the Gulf Cooperation Council” with China’s trade with Arab States reaching $240 billion last year, establishing it as the region’s largest trading partner and a major buyer of crude oil that counts on the region for half of its imports.