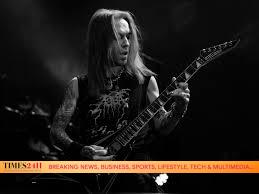 Children of Bodom’s member, Alexi Laiho, died at the age of 41

Alexi Laiho, a member of the Children of Bodom band, has died at the age of 41 earlier today. His death was confirmed by his family and his bandmates.

No confirmation about his cause of them has been announced yet. But Alexi Laiho died at the age of 41 remained to be a big shock for the entire Finish musical industry. Laiho was the founding vocalist of the influential Finnish metal band “Children of Bodom.” His former bandmates hinted that Laiho suffered from a long-term health issue before he passed away.

In a statement, they wrote.

“Laiho had suffered from long-term health issues during his last years. More than 25 years of friendship. We lost a brother.”

“The world lost a phenomenal song writer and one of the greatest guitarists of all time. Memories and Alexi’s music will live forever. Our thoughts are with Alexi’s family during this difficult time. -Henkka, Janne and Jaska,” the statement continued.

Kelli Laiho-Wright, his wife, described that Laiho was a “magnificent” husband and father. His family members said that they wished his death would be private. They hoped that whatever happens next to Laiho’s corpse will be respected by fans and his former colleagues.

Laiho started his professional musical career in 1993, but his first album was not released until the debut album named ‘Something Wild’ in 1997. He then continued with his team and introduced some other outstanding albums such as ‘Hatebreeder’ and ‘Follow The Reaper’.

Swedish metal guitarist Michael Amott, a close friend to Laiho, led the tributes and said that he was speechless about the death of Laiho. More updates about mourning of Laiho will be available as soon as possible.