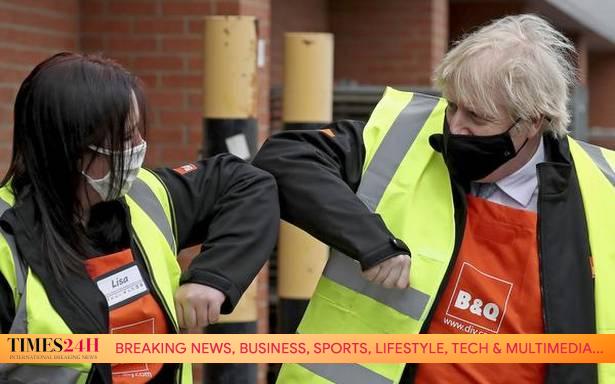 Under the traffic light system approach, countries will be designated as red, amber and green based on their COVID risk levels.

Prime Minister Boris Johnson is set to unveil a series of measures later on Monday as part of plans to start unlocking the UK from its coronavirus lockdown, including so-called COVID passports for mass events and a traffic lights system for foreign travel.

After a Cabinet meeting to finalise the latest set of plans, Mr Johnson will host a Downing Street press conference in the evening to set out details of the next stage in his roadmap – which will see non-essential shops reopen and pubs and restaurants start serving outdoors from April 12. It comes as the government announced plans for twice weekly free coronavirus tests for everyone in England to be rolled out from the end of this week.

“One of the things we don’t want to see – and just as the vaccination programme is working so well – is getting new variants or risking new variants getting imported into this country,” UK health minister Edward Argar told the BBC, in reference to the “very cautious” next phase of lifting lockdown restrictions.

As part of the announcements, Mr Johnson is expected to lay out details of trial events in the coming months that will explore how ventilation and testing before and after events could help audiences back into arenas and auditoriums – over a year after being shut down to control the spread of the deadly virus.

The pilot schemes involving what is being dubbed as “Covid-status certification” will include the football FA Cup final at Wembley Stadium in London and are expected to involve a smartphone app or a paper certificate.

The trials will last until mid-May, when the next phase of lockdown easing is scheduled before a complete easing of restrictions by June 21 under Johnson’s roadmap.

According to the BBC, the first pilot event will be a comedy night in Liverpool on April 16, where audience members will be tested for COVID before and after the show.

However, critics of these plans, including more than 40 parliamentarians from Mr Johnson’s Conservative Party and privacy campaigners, have suggested that such COVID passports could prove counter-productive.

Downing Street has also indicated that ministers are finalising plans to allow overseas travel through a traffic light system approach, with countries designated as red, amber and green based on their COVID risk levels.

Non-essential international travel remains banned under current lockdown rules and the government advice continues to go against booking any overseas trips for summer holidays at this stage.