The rumors of the acquisition of Apple EA (Electronic Arts) have been making headlines lately. However, experts have clarified that this is unlikely to happen for a very simple reason. 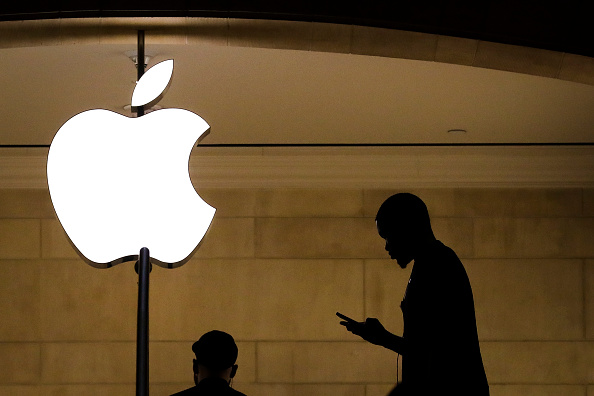 (Photo: Photo by Drew Angerer/Getty Images)
A man checks his phone at an Apple store in Grand Central Terminal, January 29, 2019 in New York City. Apple plans to release its first quarter results after US markets close on Tuesday.

The iPhone maker has a long history of speculated takeovers. One of these is the controversial Tesla purchase.

In 2021, a book was published claiming that Apple is trying to take over Tesla. But Elon Musk clarified that the rumored deal hasn’t really gone through since Tim Cook refused to meet him.

Now critics have debunked the speculated Apple EA takeover, saying the tech maker is unlikely to go after the game company.

According to the latest report from Apple Insider, new rumors about EA allege that Apple, Amazon and Disney were trying to acquire the US video game company.

(Photo: Photo by Christian Petersen/Getty Images)
A gamer poses for a photo under an EA logo during the Electronic Arts EA Play event at the Hollywood Palladium on June 9, 2018 in Los Angeles, California. The E3 Game Conference kicks off on Tuesday, June 12.

Also read: Apple’s AR/VR headset is reportedly going the stand-alone route! This is why

At the time of writing, the three companies have not yet confirmed the speculated EA acquisition. Meanwhile, several experts said that since Apple is already heading into the gaming market, it’s unlikely to go after Electronic Arts.

They explained that the iPhone maker already has its Apple Arcade subscription service, which allows consumers to have a game catalog of more than 200 popular titles.

If you want to see more details about the popular Apple Arcade service, you can visit this link.

While Apple has not released a statement regarding its alleged acquisition of EA, Mac Rumors reported that the giant tech company decided to raise the price of its Apple Music subscription service.

The sudden change in price will particularly affect students in several countries.

This detail was confirmed after the iPhone maker sent an email to students informing them of the price adjustment.

“Apple is increasing the price of this subscription from $1.49 a month to $1.99 a month,” according to an email from Apple to a customer in South Africa,” the giant tech company said.

The change in BOE’s iPhone display specifications could affect the iPhone 14 deal with Apple.

For more news updates on Apple and other stories about the iPhone maker, always keep your tabs open here on TechTimes.