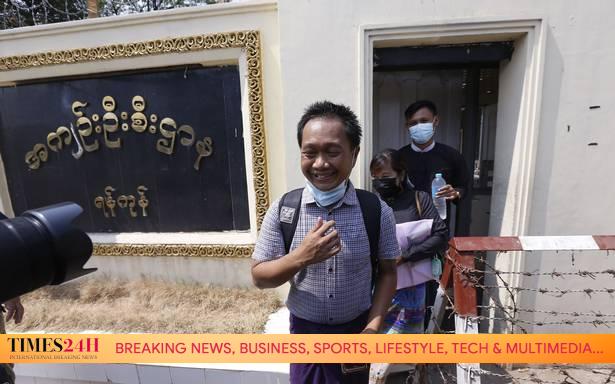 Thein Zaw, a journalist for The Associated Press who was arrested more than three weeks ago while covering a protest against the coup in Myanmar, was released from detention on Wednesday.

Mr. Thein Zaw, who was visibly thinner than before his detention, waved and smiled to photographers as he left Yangon’s Insein Prison, notorious for decades for holding political prisoners.

He told the AP that the judge in his case announced at a court hearing that all charges against him were being dropped because he was doing his job at the time of his arrest.

“Thanks to all who tried so hard for my release,” he said. “But one thing that upsets me is that there are some people who are still inside, and I hope that they can get out as soon as possible.”

He also said he was looking forward to seeing his family, whom he was able to call after the hearing.

Mr. Thein Zaw had been charged with violating a public order law that carries a penalty of up to three years’ imprisonment.

He was one of nine media workers taken into custody during a Feb. 27 street protest in Yangon, the country’s largest city, and had been held without bail. About 40 journalists have been detained or charged since the Feb. 1 coup that ousted the elected government of Aung San Suu Kyi, roughly half of whom remain behind bars.

Hundreds of people imprisoned for demonstrating against last month’s coup in Myanmar were released Wednesday, a rare conciliatory gesture by the military that appeared aimed at placating the protest movement.

Witnesses outside Insein Prison in Yangon saw busloads of mostly young people, looking happy with some flashing the three-finger gesture of defiance adopted by protesters. State-run TV said a total of 628 were freed.

Wednesday’s release was an unusual overture by the military, which has so far seemed impervious both internal pressure from protests and outside pressure from sanctions. In the face of an increasingly brutal crackdown, demonstrators tried a new tactic Wednesday that they dubbed a silence strike, calling on people to stay home and businesses to close for the day.

The prisoners released appear to be the hundreds of students detained in early March. One lawyer, speaking on condition of anonymity because she fears drawing attention from the authorities, said all those released were arrested on March 3. She said only 55 people detained in connection with the protests remained in the prison, and it is likely they will all face charges under a law that carries a penalty of up to three years in prison.