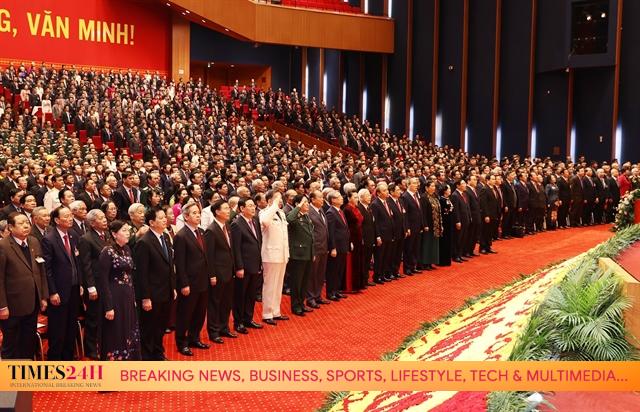 HÀ NỘI — The 13th National Congress of the Communist Party of Việt Nam, taking place from January 25 to February 2, has made international headlines.

The Associated Press (AP) on Monday ran an article saying that almost 1,600 delegates are attending the congress this week to approve future policy and help select the nation’s top leaders.

Hà Nội’s streets are lined with the Party’s hammer and sickle flags, national flags and posters to promote the congress, which is held every five years. Some 10,000 people involved with the event must each take two tests for the coronavirus SARS-CoV-2.

The article cited Murray Hiebert, a senior associate of the Southeast Asia Program at the Center for Strategic and International Studies in Washington, as saying that Việt Nam has grown an average of 6 per cent over the past five years and nearly 3 per cent in 2020, when most of its neighbours slumped into recession due to the pandemic.

Japan’s Nikkei Asia newspaper said the same day the congress is an important political event of Việt Nam as it takes place at a time when the country looks to leverage its economic advantage as one of the few countries that expanded gross domestic product in 2020, up 2.9 per cent thanks to efficient handling of the coronavirus pandemic.

The Republic of Korea (RoK)’s media also covered the nine-day event, saying the Vietnamese Government targets economic growth of 6.5-7 per cent a year during 2021-2026, and aims to turn Việt Nam into a middle-income country.

The congress has also made headlines on Australian websites like canberratimes.com.au, thewest.com.au, and the leader.com.au.

The congress is also a focus of media attention in Southeast Asia.

Singapore-based The Straits Times also highlighted Việt Nam’s success in containing COVID-19, that has helped its economy outstrip much of Asia in the past year and noted that Viet Nam is already eyeing average annual gross domestic product growth of 7 per cent over the next five years.

Malaysia’s The Star, meanwhile, reported the total of 1,587 delegates representing more than 5.1 million Party members nationwide at the congress makes this the largest number ever in the history of Party congresses.

It quoted Mai Văn Chính, deputy head of the CPV Central Committee’s Organisation Commission, as saying that women and members of ethnic minority groups account for 13.99 and 11.03 per cent of the delegates, respectively.

The guests will include former Party and State leaders, ambassadors, and heads of international organisations in Hà Nội, representatives from the intelligentsia and arts community, outstanding youth union members and religious officials, among others, it said.

Nguyễn Xuân Thắng, Director of Việt Nam’s Hồ Chí Minh National Academy of Politics, was also quoted by The Star as saying that among the documents submitted to the Congress, there were “numerous new items, especially in terms of approach.”

The agenda of the congress focuses on reviewing the implementation of the Resolution of the 12th Party Congress associated with the evaluation of 35 years of the implementation of “Đổi mới” (Renewal) policies and the 10-year socio-economic development strategy 2011-2020, and outlines the socio-economic development orientations and tasks for 2021-25 and goals and orientations to 2030 and the national development vision to 2045, it added.

It reported that Việt Nam had gone 53 consecutive days without any new COVID-19 cases in the community. —VNS