WhatsApp is working on a new Flash Calls feature for Android

WhatsApp is introducing a new feature called Flash Calls which will allow you to log into your account quickly. Here is what we know.

WhatsApp is introducing a new feature that will allow you to log into WhatsApp quickly according to a report by WABetaInfo. The new feature which is in development is called Flash Calls and is currently in the WhatsApp beta for the Android 2.21.11.7 update. Flash Calls will allow users to quickly get verified while logging into WhatsApp via an automatic verification over a call.

How does it work?

WhatsApp will call your phone number using this automatic verification method, and then automatically end the call. The platform will then verify the last phone number in your phone’s log is equal to the number that gives you the 6-digit code. The report states that the phone number will be different each time which will ensure a safe experience while verifying your account. WhatsApp will need your permission to make and manage calls and access to your phone’s log during this process. The call history won’t be used by WhatsApp for other purposes. 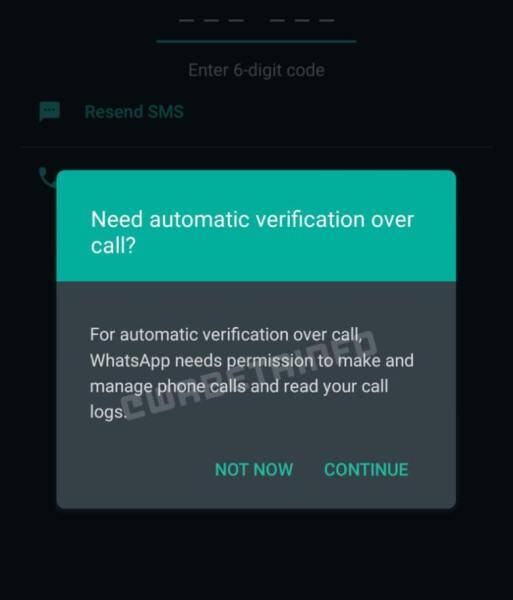 It is important to note that iOS smartphone users won’t be getting the feature as Apple doesn’t offer any public API to read the call history (Image Source: WABetaInfo)

It is important to note that iOS smartphone users won’t be getting the feature as Apple doesn’t offer any public API to read the call history. The report further states that this feature is optional and users will still be able to verify themselves using the existing methods.

WhatsApp has also introduced a new feature that allows users to choose between multiple playback speeds while playing an audio file. The new options will allow you listen to longer voice messages easily and can also be used to skip through large messages to get to a particular point. This helps make the most of long voice messages, where it can sometimes be time-consuming to go through the entire message without skipping on any details.

Must Read |Three red ticks on WhatsApp? No, government is not recording your calls, messages

The latest WhatsApp update for Android and iOS changes that with the introduction of WhatsApp’s new Fast Playback speeds. There are two new playback speeds offered in the feature, taking the number of playable speeds to three. These include 1X, the default, original playback speed, along with 1.5X and 2X, which let you play the file at 50% or 100% faster speeds.