WhatsApp Fast Playback for voice messages: What it is and how to use it

Here’s all you need to know about WhatsApp Fast Playback speeds and how to use them.

WhatsApp introduced a new feature that lets users choose between multiple playback speeds while playing an audio file. The new options let you listen to longer voice messages easily and can also be used to skip through large messages to get to a particular point.

This helps make the most of long voice messages, where it can sometimes be time-consuming to go through the entire message without skipping on any details. The latest WhatsApp update for Android and iOS changes that with the introduction of WhatsApp’s new  Fast Playback speeds.

There are two new playback speeds offered in the feature, taking the number of playable speeds to three. These include 1X, the default, original playback speed, along with 1.5X and 2X, which let you play the file at 5-% or 100% faster speeds. Here’s how you can easily use both new speeds. 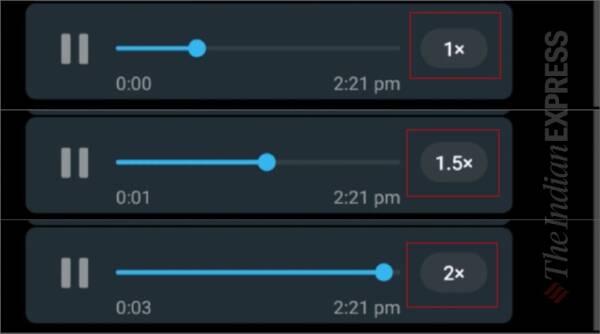 Users can speed up voice messages by first opening WhatsApp and navigating to the Voice Message in question. Tap play on the Voice Message to begin listening to it. Tap on the ‘1x’ on the voice message to change it to ‘1.5x’. Tap on it again to go from 1.5X to 2X. When already at 2X speeds, users can tap on the ‘2X’ button to change playback back to the default 1x speed.