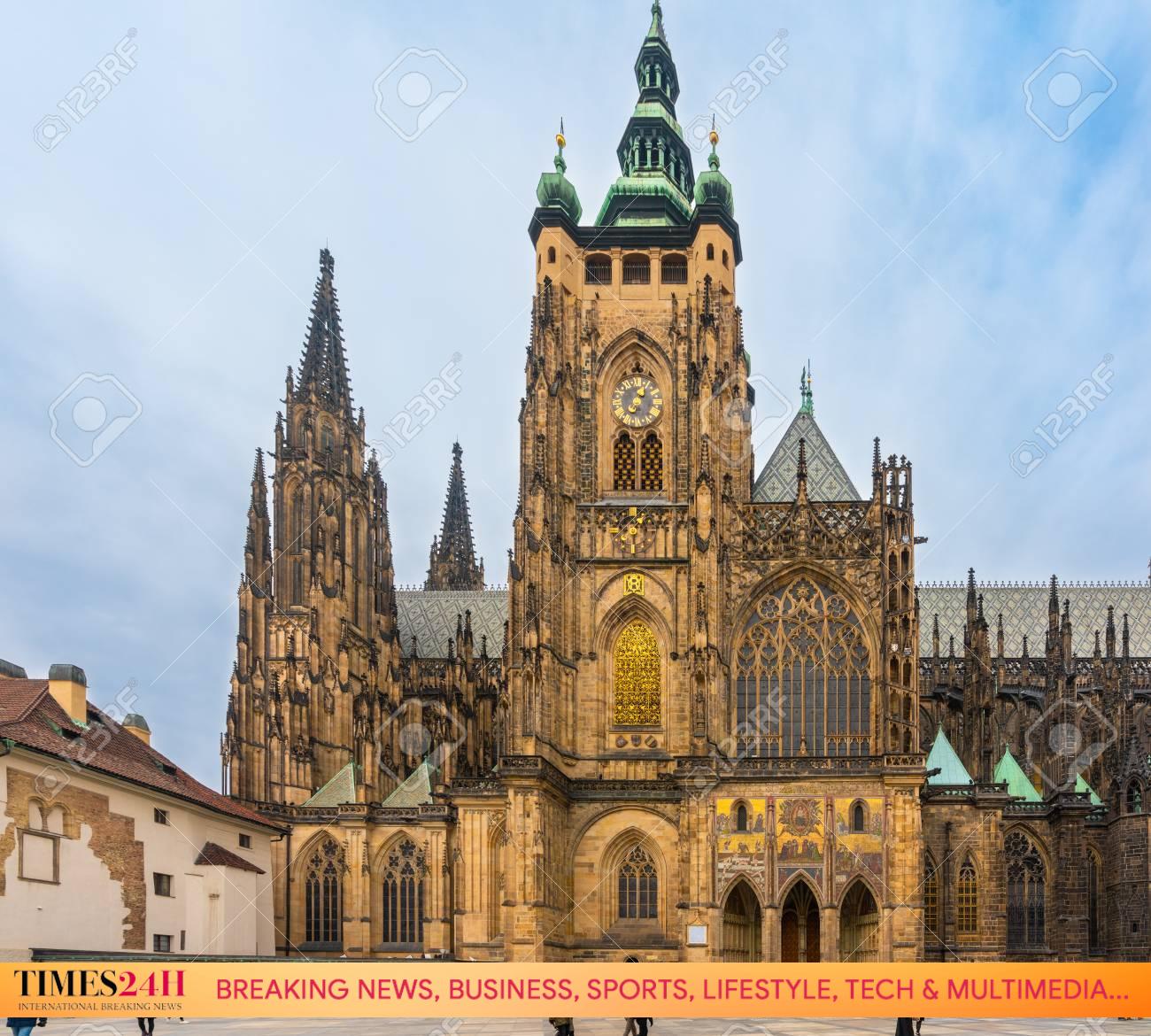 The most beautiful cathedrals in the world

All of these mesmerizing structures are so much more than just places of worship. From recognizable city icons to cathedrals-turned-museums, these incredible buildings range from the historic to modern, yet all are utterly stunning. Here, we take a look at the world’s most beautiful cathedrals. 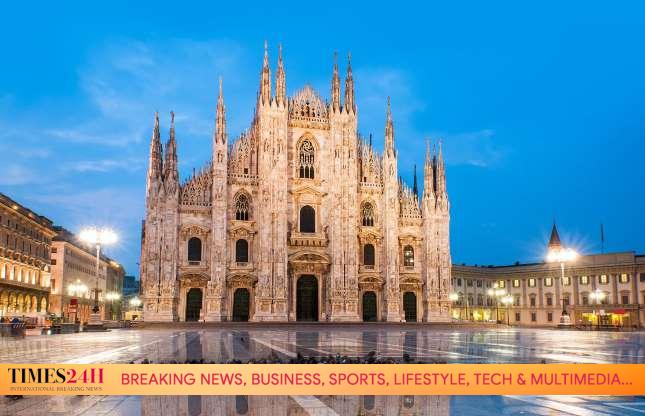 St. Paul’s Cathedral, one of London’s sightseeing highlights, has been a place of Christian worship for more than 1,400 years (and pagan before that). An Anglican cathedral and the seat of the Bishop of London, the current St. Paul’s building dates back to 1675, after the previous cathedral was destroyed in the Great Fire of London. The cathedral has also been the site of several historic events including Sir Winston Churchill’s funeral, the peace services marking the end of both World Wars and Prince Charles and Lady Diana Spencer’s wedding. 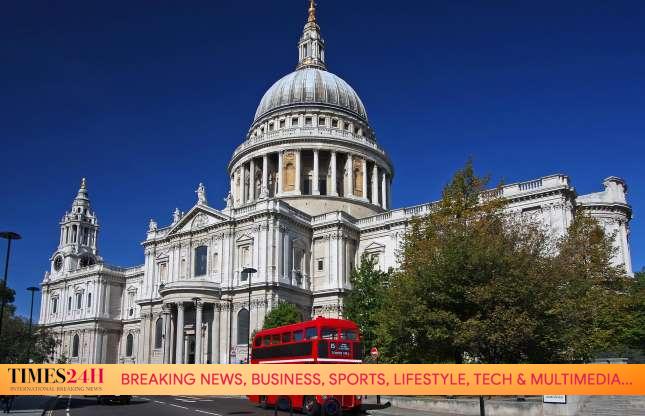 The German city’s most famous sight, Cologne Cathedral (Kölner Dom in German) is a symbol of German Catholicism and was declared a World Heritage Site in 1996. One of Germany’s most-visited landmarks, it usually attracts an average of 20,000 people a day who come to admire its twin spires. Notably, the cathedral’s choir stalls are some of the largest of any medieval church.

One of the most colorful buildings in the world, the ornate St. Basil’s Cathedral is one of Moscow’s most recognizable landmarks. Located in Red Square, the cathedral’s design was intended to resemble the flames of a bonfire. The church was confiscated from the Russian Orthodox Church and completely secularized in 1929 as part of the Soviet Union’s doctrine of state atheism. It’s since operated as a State Historical Museum but weekly Orthodox services were restored in 1997. 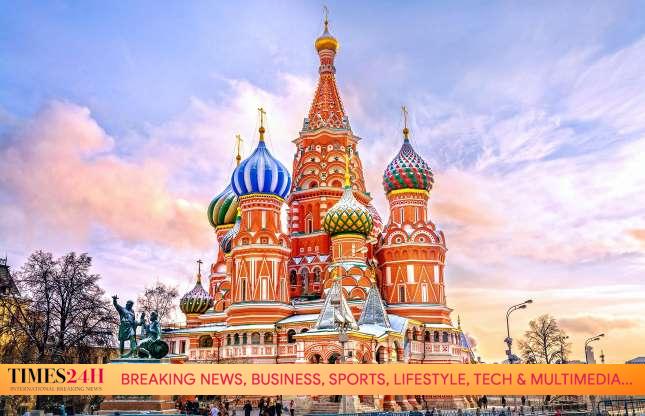 An unusual building to be found among the towering skyscrapers of Fifth Avenue, St. Patrick’s Cathedral is the country’s largest Neo-Gothic Roman Catholic cathedral. The cathedral was named after St. Patrick, the patron saint of Ireland, in response to the increasing number of Irish immigrants in the city during the second half of the 20th century. Today it’s one of the most prominent landmarks in New York City and is at the center of St. Patrick’s Day celebrations every year. 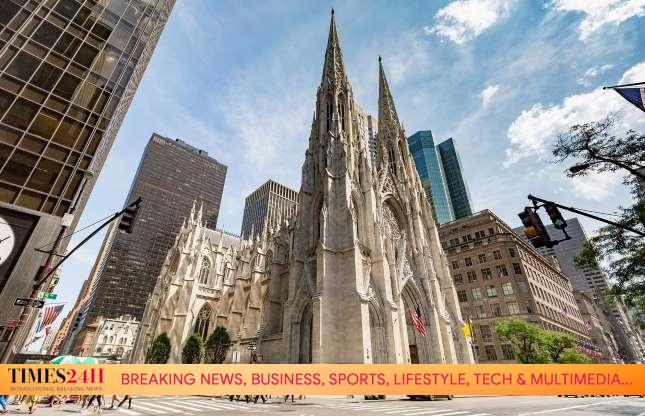 The world’s largest Gothic cathedral, Seville Cathedral is simply mind-boggling. Next to one of Seville’s most popular attractions, the Alcázar palace complex, the cathedral was built on the site of a Moorish mosque. Some of the oldest parts of the cathedral, like the orange tree courtyard and the Giralda tower, date back to the late 12th century. 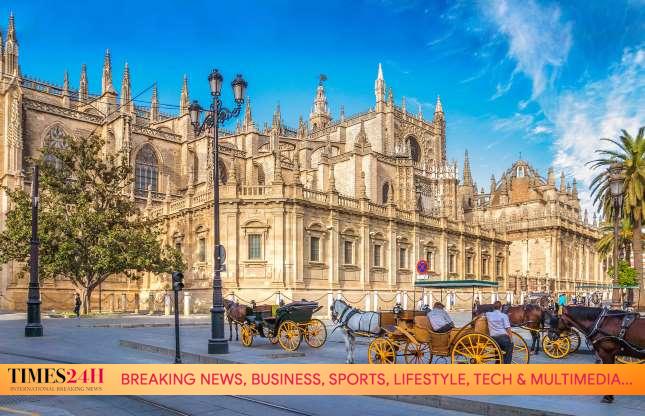 The Gothic York Minster rises high above the city of York in northeast England. Officially called the Cathedral and Metropolitical Church of Saint Peter in York, the cathedral is the seat of the Archbishop of York, the third-highest office of the Church of England. The cathedral is also notable for having the largest expanse of medieval stained glass in the country. 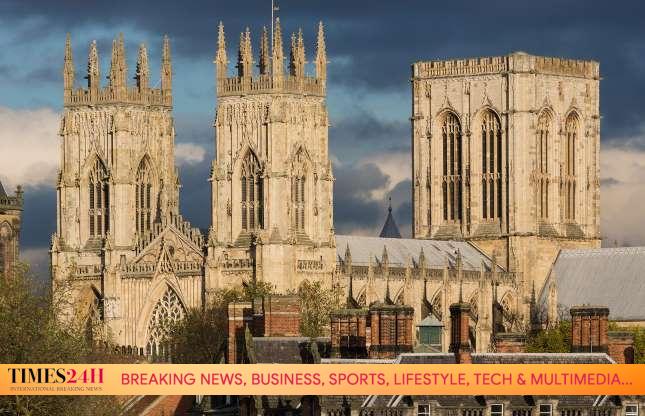 Despite its name, Berlin Cathedral has never been an actual cathedral as it’s never been the seat of a bishop, but it’s still a stunner. The Neo-Renaissance building has four towers and an impressive dome topped with a golden cross. Located on Berlin’s Museum Island, the church was finished in 1905 and houses not only a place of worship but a museum and concert hall too. 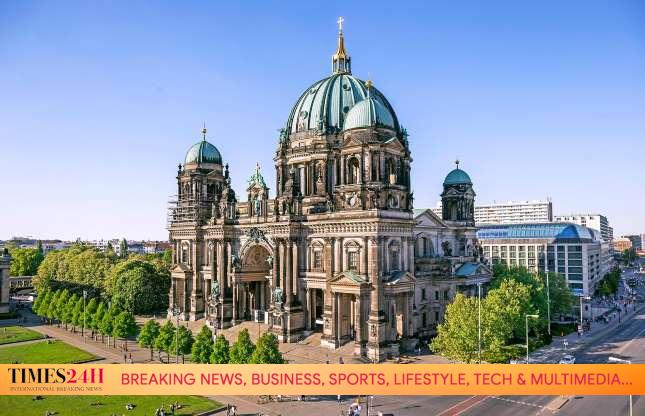 One of Mexico City’s most recognizable landmarks, the Mexico City Metropolitan Cathedral is both the largest and oldest cathedral in Latin America. An architectural masterpiece, the building is a unique mix of three styles – Baroque, Neo-Classic and Neo-Renaissance – reflecting the lengthy construction process. Once on the World Monuments Fund’s list of 100 most endangered sites due to accelerated sinking, the cathedral was removed from the list in 2000. 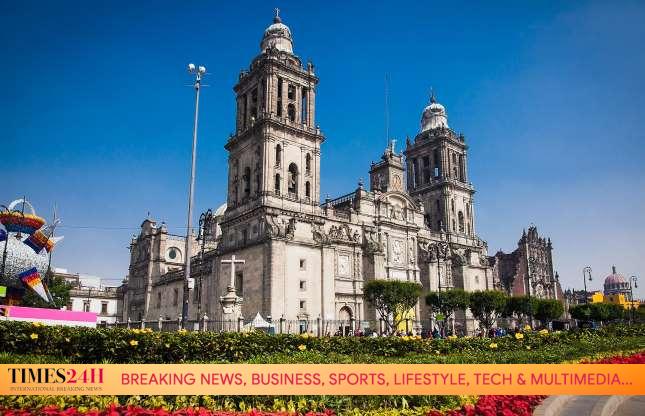 The St. Louis Cathedral in New Orleans has been located on this site since 1794. However, due to extensive expansion and rebuilding work in 1850, little of the original church remains. It’s the oldest Catholic cathedral in continual use in the United States and one of NOLA’s most notable landmarks. 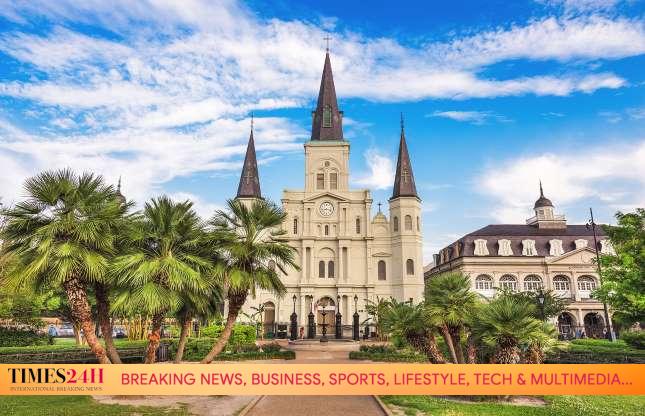 One of the most magnificent cathedrals in the world, the stunning marble façade of Santa Maria del Fiore is instantly recognizable. Located in Florence’s Piazza del Duomo along with The Baptistery of St. John and Giotto’s Bell Tower, the cathedral is one of the most famous in the world. One of its most notable features is Brunelleschi’s Duomo – more than 500 years after completion it still remains the largest masonry dome in the world. 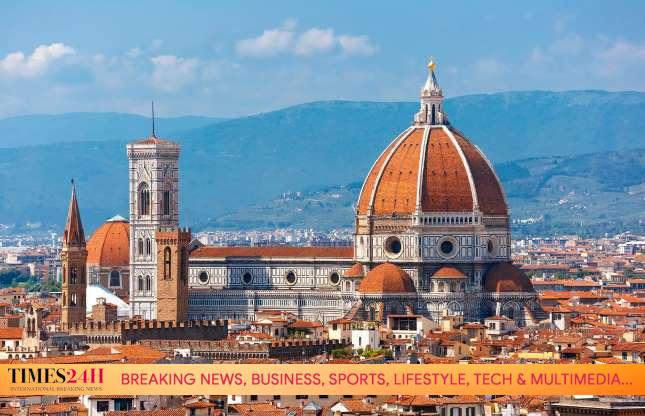 Situated within the Prague Castle complex, this towering cathedral is the seat of the Archbishop of Prague. Although the cathedral’s formal title is very lengthy, dedicated to St. Vitus, St. Wenceslaus and St. Adalbert, it’s more commonly known as St. Vitus Cathedral. A prominent example of Gothic architecture, it’s the largest and most important church in the country, and contains the tombs of many Bohemian kings and Holy Roman Emperors.

Designed by Brazilian architect Oscar Niemeyer and dedicated in 1970, the Cathedral of Brasília in the Brazilian capital is usually visited by around a million people every day. The cathedral’s shape represents hands moving upwards to heaven and, surprisingly, most of the structure is actually below ground with only the 230-foot (70m) roof visible above ground. 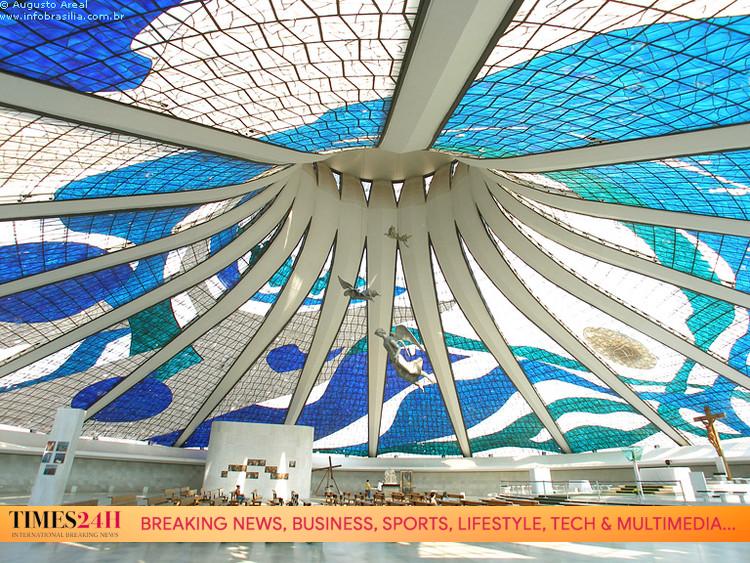 Cathedral of Our Lady of the Angels, Los Angeles, California, USA

Also known as COLA, the Cathedral of Our Lady of the Angels replaced the previous Cathedral of Saint Vibiana which was severely damaged in the 1994 Northridge earthquake. The new building opened in 2002 and sparked controversy for its large size, non-traditional architecture and expensive construction – the altar budget alone was $5 million. 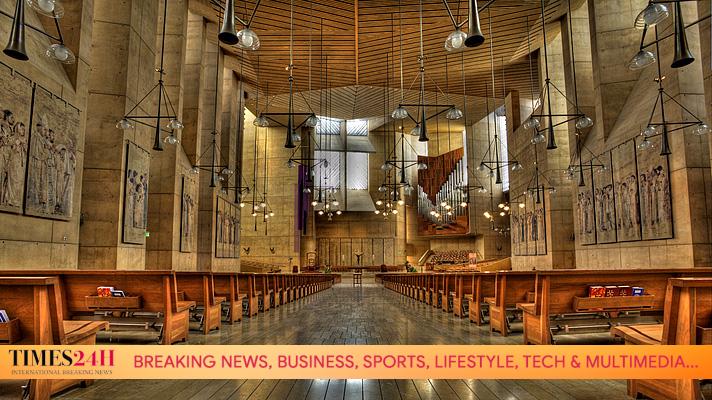 One of the most lavishly decorated churches in the world, St. Mark’s Basilica in Venice’s Piazza San Marco is the seat of the Roman Catholic Archdiocese of Venice. It’s an exceptional example of Byzantine architecture, reflecting Venice’s past as an international trading center. Rebuilt after a fire in 932, the basilica is best defined by its protruding domes, marble-clad walls and gold-leaf mosaics. 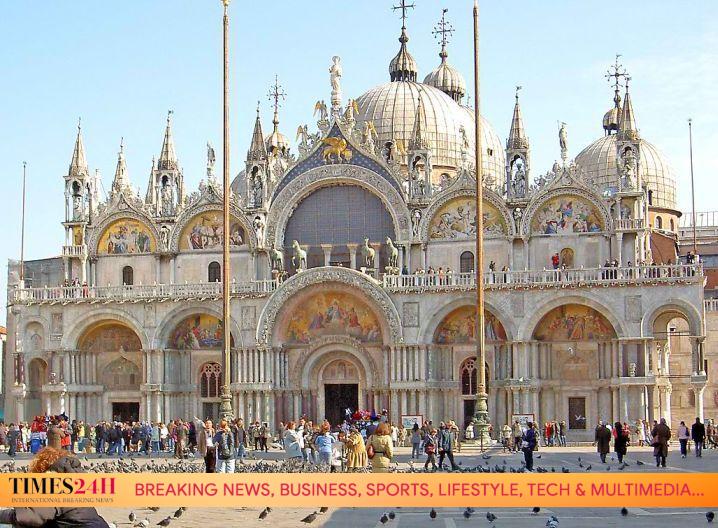 The grand finale marking the end of the Camino de Santiago pilgrimage route, the Cathedral of Santiago de Compostela is a striking landmark on the city’s skyline. It was built over several centuries and completed in 1211. As such, it’s a mix of mostly Romanesque architecture, with several Gothic and Baroque additions. 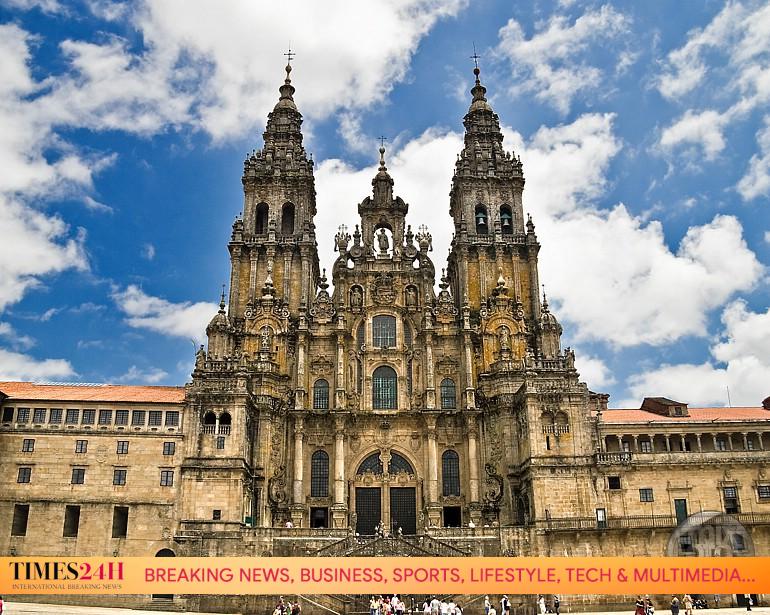 One of Vienna’s most culturally significant landmarks, St. Stephen’s Cathedral is particularly notable for its colorful roof. Made up of 23,000 individual tiles, it features a depiction of an Imperial double-headed eagle, the emblem of the Holy Roman Empire and later the Austrian Empire. The cathedral has hosted several important events in Habsburg and Austrian history, including the wedding of Mozart and Constanze Weber, and funerals of Antonio Vivaldi and F1 champion Niki Lauda. 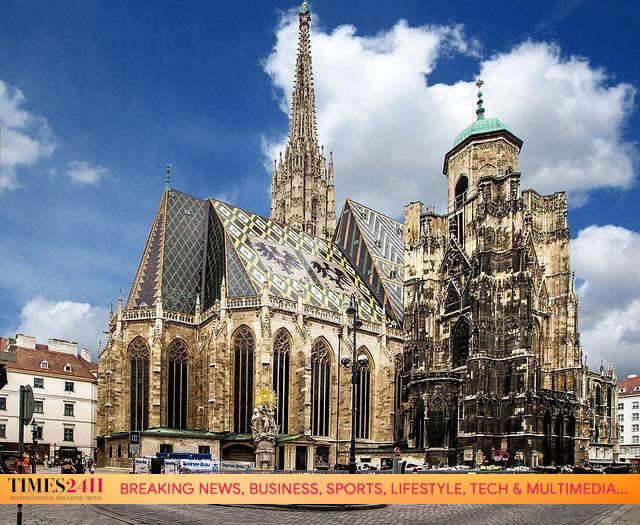 The first heritage site in Ukraine to be inscribed on the World Heritage List along with the Kiev Cave Monastery complex, St. Sophia’s Cathedral is one of the most recognizable landmarks in Kiev. Its foundations were laid in the early 11th century and its name comes from Istanbul’s Hagia Sophia. Since the late 1980s there have been promises to return the building to the Orthodox Church but due to disagreements, the cathedral remains a secular museum. 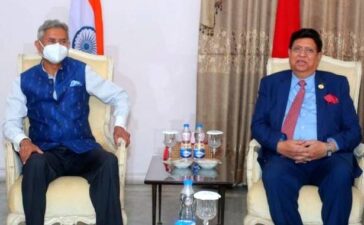 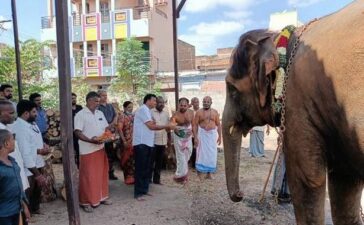 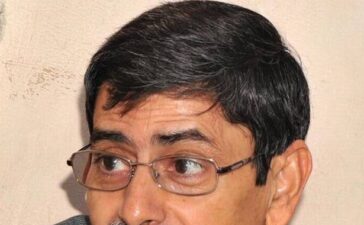 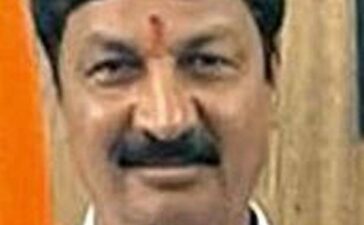 Realme 7i next in line for Realme UI 2.0 early access