Samsung’s Smart Monitor M7 is better suited for people who have recently moved to compact apartments and are looking for one display that works both as a monitor and smart TV.

Over the past year or so, I too have been working from home, and my room has been converted into an office space. Given the fact that the coronavirus is here to stay a little longer than expected and working from home is the only option in the short term, I have been thinking of investing in a monitor. While I was scouting for a premium monitor for my Mac Mini, Samsung approached me to review its latest Smart  Monitor M7. I thought it would be a regular 4K monitor perfect for work and play. But the M7 was more than a plain display. Samsung calls the M7 a “smart monitor” that doubles as a smart TV with built-in apps like Netflix and Apple Music. The monitor also comes with the option to use Office 365 if you don’t have a computer. But why would people pay Rs 57,000 for Samsung’s high-end M7 monitor, in the first place?

Here are my thoughts on the TizenOS-powered Samsung Smart Monitor M7.

The Samsung Smart Monitor M7 looks just like a computer monitor — an understated design, featuring thin bezels framing a 32-inch screen. The monitor’s uncluttered look easily blends with the interiors of my room. Even though the M7 is a modern-day computer monitor, it looks much like a small TV. You can keep the M7 in a bedroom, kids’ room, or in a secondary living room.

Setting up the Smart Monitor M7 is easy. All you need to do is attach the base to the stand with a single screw, and then hook it up to the back of the TV. The entire process takes less than 10 minutes. There’s also an option to mount the monitor to a wall. While the monitor tilts forward and backward, it lacks the option to adjust the height or change the orientation of the screen. Thankfully, the M7 ships with a TV remote, which makes it easy to navigate the smart TV interface. 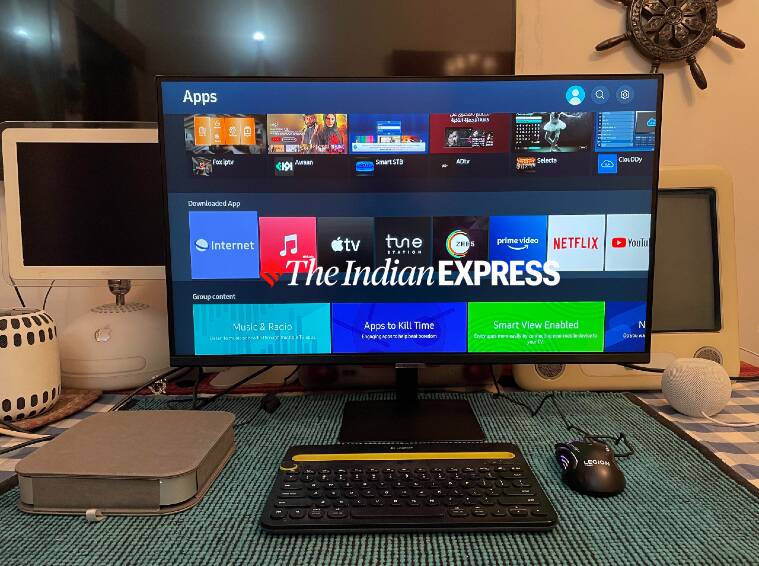 You can run movie streaming like Netflix and Amazon Prime Video directly on the device. (Image credit: Anuj Bhatia/Indian Express)

The port selection is serviceable: a USB-C port and two HDMI ports, including one that supports ARC for connecting a soundbar. Plus, there are three USB-A ports on the back of the monitor for using accessories. The monitor also supports Wi-Fi and Bluetooth. Unfortunately, it lacks support for HDMI 2.1 which is capable of supporting higher video resolutions including 4K content at 120 frames per second (fps) and Dolby Vision HDR. The speakers on this monitor are average, while I don’t call them disappointing, they seem fine for YouTube videos or streaming a movie on Netflix.

The M7 has a 32-inch display with a native resolution of 3,840 x 2,160 pixels and a 16:9 aspect ratio. There’s nothing to scream about the display though it can produce sharp images. In fact, this display isn’t bad for browsing, productivity work, or video watching.

During my testing, it was a pleasure to watch Please Like Me on Netflix. The monitor showed vivid colours and had a good dynamic range. Colours seemed fine, while the text looked crisp. Notably, Samsung lets you change the settings of the monitor between Standard, Natural, and a Game mode while there are Ultrawide Game View, Movie, and Filmmaker options too. I really liked the Filmmaker mode, which basically fine-tunes the image and brings realism to the movies. 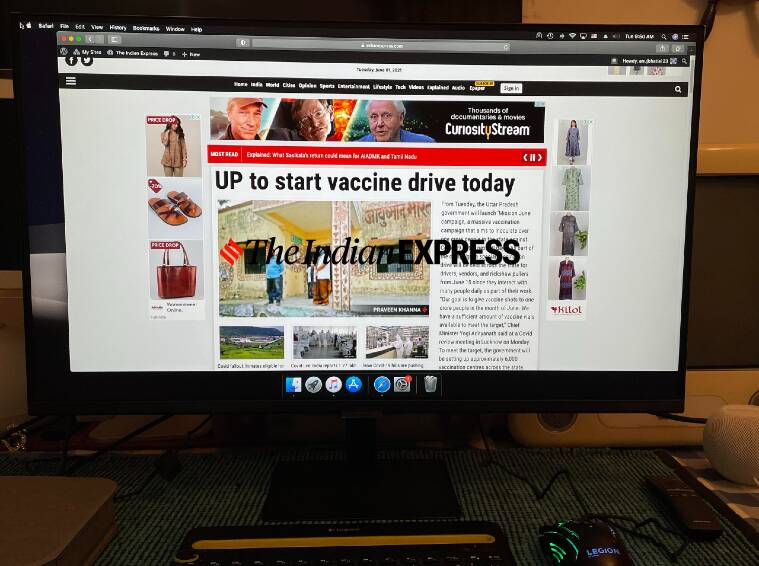 I mostly connected the M7 to my Mac Mini and Nintendo Switch, but you can pair any Windows PC or Chromebook. It also supports HDR10, which is really nice when using the monitor’s native Netflix app.

The Smart Monitor M7 is aimed at casual users who want a premium monitor for home use, but it would have been nice if the monitor supported higher refresh rates. The M7 caps at a maximum 60Hz, meaning if you own a PS5 or Xbox Series X, you won’t be able to enjoy games at 120fps.

But what makes the M7 different from popular 4K monitors with high refresh rates are the built-in apps. That means you can use Samsung’s Smart Monitor M7 as a standalone device — no need to hook a computer to stream a movie on Amazon Prime Video or listen to the latest pop songs on Apple Music. Every major app – Netflix, Apple TV+, YouTube, Zee5, and more – is baked in the monitor. This is all possible due to Tizen — the same smart operating system that powers Samsung’s smart TVs. The advantage of a native Netflix app or Amazon Prime Video is that I don’t have to open a web browser on my PC, load the app, and stream the content. I can easily stream the content from whichever app I am subscribed to and control the playback of movies using the remote control of the monitor. The easy-to-use remote control also includes a Bixby voice assistant. Not to forget, the Smart monitor M7 also supports AirPlay 2 which offers wireless streaming of content through the iPhone, iPad, or Mac. 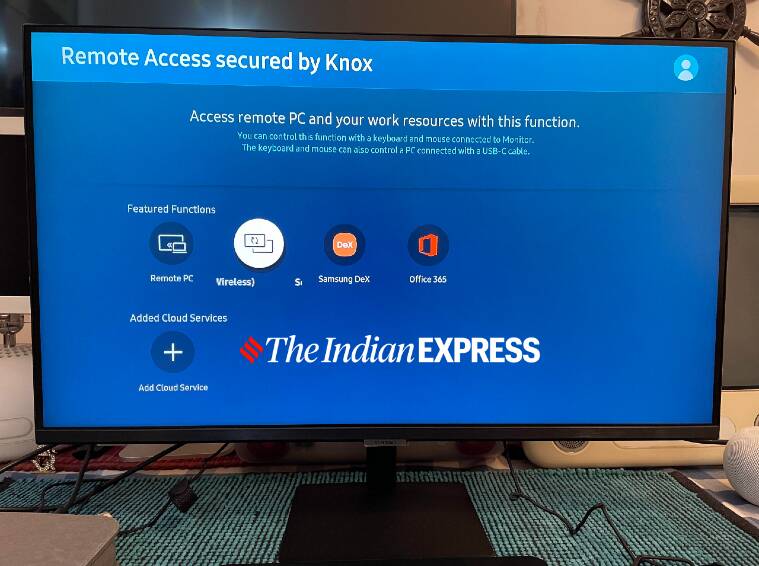 How can the Smart Monitor M7 not come with Samsung-exclusive features? Well, the M7 supports Samsung Dex which turns your Samsung Galaxy smartphone into a PC. I was not able to test this feature as I had no access to Samsung’s newer flagship smartphones at the time of testing this monitor. Then there is also the option to use Microsoft’s Office 365 apps such as Word and Powerpoint if you don’t have access to the computer on the spot. Of course, you need to subscribe to Office 365 to use all of the standalone office apps. 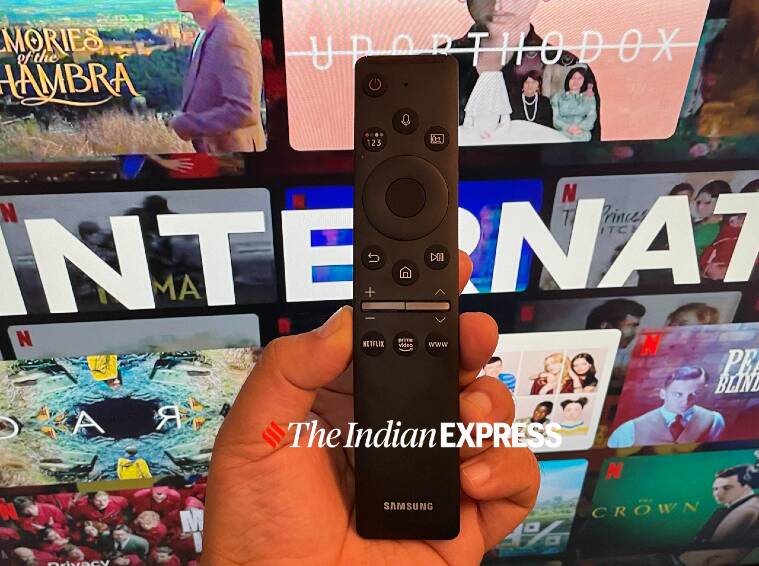 Samsung Smart Monitor M7 review: Should you buy it?

The Samsung Smart Monitor M7 offers astounding value for what it does. If you have plans to upgrade a premium monitor for home use, you can definitely check out Samsung’s newest offering. Built-in apps and the ability to mirror your smartphone to smart monitor work in favour of the Smart Monitor M7. That said, the M7 does not target creative professionals or those who just got next-gen consoles from Sony and Microsoft. This monitor is better suited for people who have recently moved to compact apartments and are looking for one display that works both as a monitor and smart TV.